KUDOS: Denver High School Jazz Band Nominated (Again) As One Of The Best 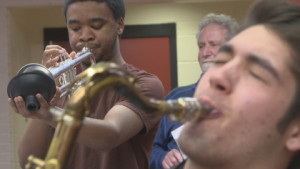 By Dillon Thomas, Denver – CBS4 | For the fourth time in school history, the jazz band at Denver School of the Arts (DSA) was nominated as one of the 15 best high school jazz bands in the nation. DSA recently won second place in the Essential Ellington High School Jazz Band Competition.

It is the only Colorado school to ever be nominated. [Editor’s note: Game on, the rest of you!]

Bendure is one of a few on the DSA band to say they were nominated for the prestigious award twice. The students said they were ecstatic to receive the nomination once again, and to know their hard work was recognized by being automatically placed in the top 15.

“Everything we did was for a reason, and that reason is to get first place,” said Camryn Honea, a senior trumpet player. “We outdid ourselves. We know what we are doing, and we are swinging hard as a band.”

“(Being nominated) probably the number one thing that has happened to me in my life so far,” Bendure said.

Dave Hammond, Director of Bands at DSA, said the 2019 nominated band is one of the best he’s directed at the school.

“When you take all that individual energy, and you put it together, this is one of the best ensembles I’ve had in 25 years,” Hammond said.

Hammond, who has been with the band for each of their four nominations, said DSA is a hub for creativity, talent, and overall excellence in students. He said the nomination for the award, once again, solidified his belief in his students.

“It really does take a village, and here at DSA it is a pretty tight village,” Hammond said.

DSA will fly to New York City in May and will perform at the competition. The venue is the iconic Lincoln Center.

“We are the arts school of Denver, and we have to represent ourselves as that,” Bendure said. “I’m excited, and really, really, really grateful to have the opportunity to go there again, and do our best there.”

Dillon Thomas is a reporter at CBS4 and a Colorado native.

Previous:
INTERESTING BITS: Vikan Middle School Gets New Drum Thanks To Search And Rescue Crews
Next:
SONGWRITERS’ CORNER: How Ryan Adams is Making Me Rethink My Rock Collection