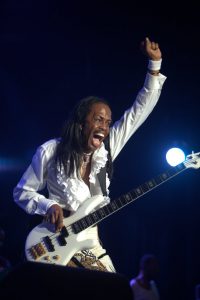 Verdine White in a performance with Earth, Wind, and Fire in 2010 (Photo by Tom Beetz on Wikipedia)

By Ashraf Khalil, Associated Press | Band Earth, Wind and Fire are in the latest class of Kennedy Center Honors recipients. Others chosen to receive the award for lifetime achievement in the arts include actress Sally Field, singer Linda Ronstadt, conductor Michael Tilson Thomas and the television show Sesame Street.

The recipients announced Thursday will be honored during a gala ceremony in early December. For the third straight year, the attendance of President Donald Trump seems likely to be a subject of speculation in advance of the event. Trump has skipped the past two celebrations. The first time , multiple recipients threatened to boycott the event if he attended.
> > > > > > > > >
Earth, Wind and Fire was originally formed in Chicago by lead singer Maurice White. The group drew elements from rhythm and blues, funk, and disco in a flashy crowd-pleasing mix that spawned eight No. 1 hits. Songs such as “September” and “Shining Star” remain in heavy rotation for both radio station programmers and wedding DJs.

Maurice White died in 2016, but his brother Verdine, the group’s longtime bassist, said he was proud of how their songs have become part of the soundtrack of American music.

White is the co-founder of the Verdine White Foundation which aims to provide musical education to underprivileged and gifted students. During 2007 he was as well inducted into the Boys and Girls Club’s Alumni Hall of Fame. https://en.wikipedia.org/wiki/Verdine_White