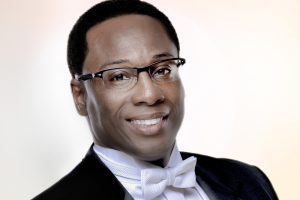 Winner of the Grammys Educator Award: Advanced Women’s Choir’s Jeffrey Redding – was announced on CBS This Morning, 2/06/19 – Jeffrey Redding say he is “Serving his students to honor his mother.” (A single mom who raised 4 sons by working in the school cafeteria)

The Grammys Educator Award is to award music teachers who play an integral role in stewarding the future promise of young musicians.

That’s the underlying theme behind the Music Educator Award, a joint honor presented by the Recording Academy and the GRAMMY Museum to recognize current educators (kindergarten through college, public, and private schools) who have made a significant and lasting contribution to the field of music education.

A total of 10 music teachers spanning the U.S. have been announced as finalists for the 2019 Music Educator Award.

Dr. Jeffery Redding received the Grammy Music Educator Award, which is given to one teacher for his or her role in shaping students’ lives through music

West Orange now has a Grammy Award winner in its community.

Dr. Jeffery Redding, director of choral activities at West Orange High School and the executive director of the Garden Choir, is the 2019 winner of the Grammy Music Educator Award, given to one teacher for his or her role in shaping students’ lives through music.

In the previous two years, Redding was nominated and reached the quarterfinal round.

It was created to recognize current educators who have made a significant and lasting contribution to the field of music education and who demonstrate a commitment to the broader cause of maintaining music education in the schools.

“I’m in shock,” Redding said when he was named a finalist. “I’m honored. I’m humbled by it greatly. But also it gives the message a platform that we’ve done it at West Orange High School. It’s more so about the people who supported me. It’s more so about the students I’ve taught and the administrations that allowed me to do what I do. It gives a greater platform to say, ‘Look what we’ve done.’”

Redding has been featured as a guest conductor at many prestigious venues, such as Carnegie Hall and the Kennedy Center. He has given a TEDx Talk. In November and December, he serves as one of four conductors at Disney’s Candlelight Processional at Epcot.

The choral director holds memberships in numerous musical organizations and has served as chairman and co-chair of multiple musical programs.

THE GRAMMYS
The Recording Academy represents the voices of performers, songwriters, producers, engineers and all music professionals. The Grammy is music’s only peer-recognized accolade and is the highest achievement.

Amy Quesinberry is the community editor of the West Orange Times & Observer and the Windermere Observer. She was born and raised in Winter Garden, grew up reading the community newspaper and has been employed there as a writer, photographer and editor since 1990….

Previous:
KUDOS: And speaking of the Grammys Educator Award…
Next:
TALENT NEEDED: Performance High has Opened Registration for Our Spring Classes!