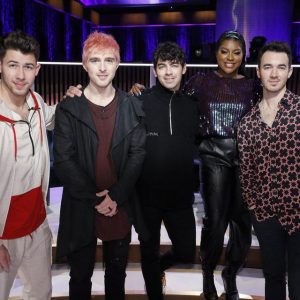 By Lyndsey Parker, Editor-in-Chief, Yahoo Music | Until now, up-and-coming Philly songwriter and beatmaker Able Heart (real name: John Paciolla), despite looking like a total rocker with his haunted eyes and Pepto-pink hair, has remained behind the scenes, ghost-writing for other artists. In fact, until he pitched his electro partystarter “Greenlight” for the Jonas Brothers on Tuesday’s episode of Songland, he’d never performed live for anyone before. Able was clearly nervous, pacing the audition room during his performance and keeping his eyes mostly shut throughout, but his jitters didn’t distract from the hit potential of his killer track.

It had been a hard and long journey for Able to make it to his moment. Though he only briefly alluded to “throwing his life away” at age 15 after a back injury derailed his Olympic snowboarding future — saying it was too hard to talk about his troubled past on the show — on his YouTube page he was more confessional, stating: “Since I was 15 I have struggled with drugs, addiction and depression, trying to escape the void I feel inside. … I destroyed everything good I’ve ever had and hurt the people I loved most in this world. All I’ve ever wanted was the suffering to stop and the pain I bring to others to end. Trying to fight anxiety, the highs of mania, lows of depression and constant withdraw it sometimes feels like there is only one way out. … The only thing that has ever seemed to help me express how I feel inside is through my music. The things I talk about in my music and show in my videos is my outlet. It is my therapy where I can vent how I feel, without acting on these emotions in real life. To find who I am, I first need to be honest with myself. This is my truth.”

Judge Ester Dean described “Greenlight” as sounding like “Eminem meets Travis Scott.” Fellow judge Ryan Tedder, referring to Able’s side hustle as a ghost-writer and producer, called Able “the talent behind the talent.” Nick Jonas called him an “artist.” But most importantly, all three JoBros were suckers for this song. It seemed like a perfect fit: Joe was already imagining adding a DJ to the mix, Kevin was already imagining the music video, and Nick was already crooning along in his “Jealous” falsetto.

“When you said you ghost-wrote, that broke my heart,” Dean told Able. “Because I know so many people, when people find a star, they dim their light by just allowing them to shine but in the back. You gotta know where you belong, because you are incredible.”

Still, the brothers had three other tunes to choose from. Remmi’s “Flickering” (later retitled “Do You Think of Me?”) was pretty, but it felt a bit dated, a bit Glee, and a bit CCM — not at all right for the slick hipster vibe of today’s all-grown-up Jonases. Tedder was assigned to work with Remmi on the cut, and since he’d just executive-produced the Jonas Brothers’ comeback album Happiness Begins, one might’ve thought that would give Remmi a home court advantage. But Tedder’s addition of gospel-choir gang vocals and a “Kanye beat” actually made it feel more OneRepublic than JoBros. (Perhaps Tedder should record this song himself?)