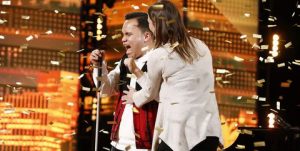 By Marianne Garvey, CNN | Pianist and singer Kodi Lee was met with a standing ovation and the golden buzzer for his performance on Season 14 of “America’s Got Talent.”

Lee, who is blind and has autism, stunned the crowd with a flawless cover of Donny Hathaway’s “A Song For You.”

The 22-year-old contestant was accompanied on stage by his mom, who gave him a pep talk before he shocked the judges and crowd with his voice and piano playing skills.

“We found out that he loved music really early on,” Lee’s mom, Tina, told the crowd. “Through music and performing, he was able to withstand living in this world. Because when you’re autistic, it’s really hard to do what everyone else does. It actually has saved his life, playing music.”

Judge Julianne Hough wiped away tears as she praised his performance. Fellow judge Howie Mandel told Lee, “I heard you, I felt you and it was beautiful.” Simon Cowell called the performance “extraordinary.”

Gabrielle Union saved the best for last, slamming down on the golden buzzer for Lee, the first of the 2019 season and advancing Lee straight to the finals.

[Editor’s note: We’ve run several articles on how music has helped people with Autism and diseases like Alzheimer’s open doors for communication. This is certainly one of the best. This is one of those “Susan Boyle” stories.]

Kodi shocked the nation with his ‘golden buzzer’ performance on Tuesday’s season premiere of America’s Got Talent.

She works closely with children on the autism spectrum here at Touro University’s Center for Autism and Developmental Disabilities.

She says all children on the spectrum have strengths just like Kodi’s.

The key is discovering what they are early in life and building on them.

“It’s like a saving grace for them to really be able to focus on those areas that they are so good at,” Dr. Honke said.

Kodi’s mom did and it was life-saving for her son.

“Through music and performing he was able to withstand living in this world because when you are autistic it’s really hard to do what everybody else does,” she said.

But not every child with autism can do what Kodi does. That’s why Dr. Honke says discovering each child’s own unique strength is essential to their advancement.

Dr. Honke advises parents of children with autism to be on the lookout for signs of their child’s interests.

Early diagnosis and early intervention are also important. For more information on the Center for Autism and Developmental Disabilities, click here.

Previous:
INTERESTING BITS: From Stan Monroe on Facebook: Confession:
Next:
MUSIC NOTES: Children Learn How To Make Music Thanks To Denver Startup