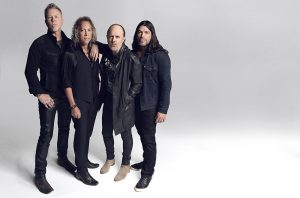 The seminal metal band Metallica and the Afghanistan National Institute of Music (ANIM) and its founder/director Dr. Ahmad Sarmast have been named the Laureates for the 2018 Polar Music Prize, to be presented by King Carl XVI Gustaf of Sweden on June 14. The announcement was made February 14th morning at Stockholm City Hall by Alfons Karabuda, chairman of the Polar Music Prize award committee.

Metallica, one of the Big Four of Thrash along with Slayer, Megadeth and Anthrax, has gone platinum 52 times according to the RIAA. All six of their studio albums released between 1991 and 2016 have reached the No. 1 spot on the Billboard 200.

Dr. Sarmast founded ANIM in Kabul in 2010 in response to that country’s civil war destruction of centuries of rich musical tradition. In the 1980s the pop music and film industries were thriving in Afghanistan, with hundreds of ensembles and a national radio orchestra playing Western and Afghan musical instruments. Between 1996 and 2001, music was completely banned. Over the last eight years, ANIM has been providing a challenging and safe learning environment for all students regardless of gender, ethnicity, religious sect or socio-economic status. The institute has a special focus on the most disadvantaged children in Afghanistan, including orphans, street vendors and girls.

All four members of Metallica expressed their gratitude for being named one of this year’s Laureates. “Receiving the Polar Music Prize is an incredible thing,” said drummer and co-founder Lars Ulrich. “It puts us in very distinguished company. It’s a great validation of everything Metallica has done over the last 35 years. At the same time, we feel like we’re in our prime with a lot of good years ahead of us.”

Co-founder, vocalist and guitarist James Hetfield added, “I feel very honored to be in such great company with the others who have accepted the Polar Music Prize. As myself and as Metallica, I’m grateful to have this as part of our legacy, our history.”

Bass player Robert Trujillo said, “Receiving the Polar Music Prize is such an honor, especially sharing it with [previous Laureates] such as Joni Mitchell, Keith Jarrett and Wayne Shorter, who I admire dearly….Hopefully this will inspire younger generations of musicians to keep the music alive.”

Guitarist Kirk Hammett said he was happy: “To be acknowledged for the work we’ve done. I know how important this is and how much of an honor it is.”

Billboard contacted Dr. Sarmast in Afghanistan to find out his reaction to being named a Laureate of the Polar Music Prize. “I was very humbled by this important award, as I saw the list of previous laureates,” he responded. “But the most pleasure was that, for first time, such a prestigious music award was coming to Afghanistan. So this is not just an honor for me, but a big achievement for the country. Such prestigious recognition as the Polar Music Prize will bring ANIM to the attention and focus of musicians and music educators all over the world. It will bring awareness for ANIM programs and students and also help in spreading the message about our mission — to rebuild the lives of Afghan children and youth through music education. [The award] will enormously contribute to the commitment of every ANIM student to stay focused and to continue to work hard for their futures and the future of music in Afghanistan.”