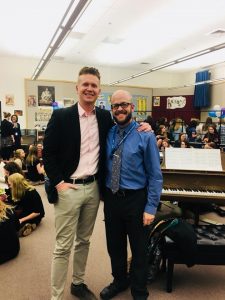 Music teachers play an integral role in stewarding the future promise of young musicians. That’s the underlying theme behind the Music Educator Award, a joint honor presented by the Recording Academy and the GRAMMY Museum to recognize current educators (kindergarten through college, public, and private schools) who have made a significant and lasting contribution to the field of music education.

A total of 10 music teachers spanning eight states have been announced as finalists for the 2018 Music Educator Award.

Selected from the 10 finalists, the 2018 Music Educator Award recipient will be flown to New York City during GRAMMY Week in January 2018. The recipient will attend the 60th GRAMMY Awards ceremony and a range of Museum events, in addition to receiving a $10,000 honorarium.

The 2018 recipient will be announced in January. In the meantime, the application process for the 2019 Music Educator Award is now open.