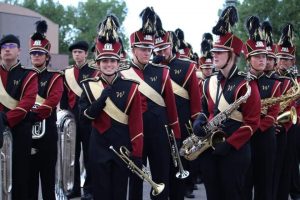 From Elizabeth Roy Ortega on Fb, 9/07/19: Congratulations to Windsor HS Band for placing 2nd at The Friendship Competition! || The competition was held at the Englewood High School on Saturday, September 7th. It is put on by Ascend Performing Arts which is a multi-faceted, youth performing arts organization dedicated to elevating life performance through the pursuit of excellence. All of the bands did very well and COMBO wants to congratulate them for their fine performances and for working so hard to get to the contest.

“The mission of Ascend Performing Arts is to further the education and growth of young people through participation in high-caliber performing arts programs that promote teamwork and discipline, develop leadership skills, and enhance self-esteem.”

What is Ascend Performing Arts?

Ascend Performing Arts is recognized as the Rocky Mountain region’s most visible performing arts organization. Programs such as the internationally acclaimed Blue Knights Drum & Bugle Corps, the 4-time Winter Guard International Champion Blue Knights Percussion Ensemble, and Blue Knights Winds play an important role in providing high-caliber performance ensembles for thousands of youth performers each year. Ascend Performing Arts also produces the Broncos Stampede Drum Line and Broncos Brass to entertain tens of thousands of NFL fans at Denver Broncos home games every season. Educational programs such as the BKXperience allows students of a variety of performance levels to learn from the best educators in the marching arts activity. Ascend Events, such as the Drums Along the Rockies and Corps Encore drum corps shows and the Friendship Cup high school marching contests, provide a stage which showcases the world’s top young musicians at the highest level.