IN MEMORIAM: Gary DeCarlo of the band Steam // Other Notable Musicians’ Deaths 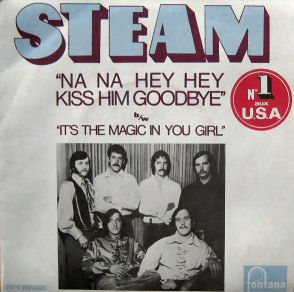 This is the cover art for the single Na Na Hey Hey Kiss Him Goodbye by the artist Steam. The band pictured is NOT Steam! The cover art copyright is believed to belong to the label, Fontana, or the graphic artist(s).

Steam was a pop-rock music group best known for the 1969 number one hit song “Na Na Hey Hey Kiss Him Goodbye.” The song was written and recorded by studio musicians Gary DeCarlo, Dale Frashuer, and producer/writer Paul Leka at Mercury Records studios in New York City. The single was attributed to the band “Steam” although at the time there was actually no band with that name. Paul Leka and the studio group recorded the first album.

Frashuer and DeCarlo were members of a vocal group called The Glenwoods from Bridgeport, Connecticut, for which Leka played the piano. The duo separated but kept in touch. Leka became a songwriter with Circle Five Productions and in 1967, he wrote and produced The Lemon Pipers’ “Green Tambourine” and other Pipers’ numbers with Shelley Pinz. In 1969, Leka was working at Mercury Records and he convinced the label’s A & R to record DeCarlo (aka Garrett Scott). With Leka producing, DeCarlo recorded four singles, all of which Reno thought would do well issued as an A-side. DeCarlo’s first single was to be “Workin On A Groovy Thing”, but was beaten by one week by the Fifth Dimension who put their version out. Then the company and Leka decided on “Sweet Laura Lee” as the next single and a B-side was needed. DeCarlo and Leka were asked to cut a B-side along with Frashuer. The song was “Kiss Him Goodbye”.

A DJ in Georgia played “Na Na Hey Hey Kiss Him Goodbye” on the radio. Requests to replay the song began to pour in by phone. Then the radio station put the song on its tight play list and other radio stations picked it up. When Mercury Records’ promotional department heard that radio stations in the South were playing Na Na, they authorized the purchase of 100,000 copies in order to put it on the Billboard popular hit chart. When radio stations in other states saw the record appear on the Billboard popular hit chart, they picked it up and airplay of the song snowballed. The investment of approximately $50,000 in promotional funds to buy their own records worked for Mercury and “Na Na Hey Hey Kiss Him Goodbye” reached number one in the United States for two weeks in December 1969. Dale Frashuer stepped out of the public eye. Paul Leka became a successful songwriter and producer before his death in 2011. Gary DeCarlo began performing again in 2012. By the beginning of the 21st century, sales of “Na Na Hey Hey Kiss Him Goodbye” had exceeded 6.5 million records.

In 2014, DeCarlo released the album ‘Long Time Comin’, which included a new version of his hit.

DeCarlo died in June 2017 after a battle with cancer.