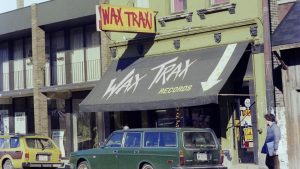 By PETER JONES – Oct. 24, 2018 || Early in a new documentary about the Denver-founded Wax Trax, Jello Biafra recalls the moment in 1975 when he giddily discovered a place of kindred spirit at a new Capitol Hill record store.

It was a defaced photo of Colorado’s John Denver—“blood” running Christ-like from the singer’s nailed-through eyes—that would act as a sort of welcome mat for the delighted Boulder teenager, who would later become lead singer of San Francisco’s Dead Kennedys.

Filmmaker Julia Nash, whose father Jim co-founded the original Wax Trax in 1975, confirms that the store—and eventual record label of the same name—were as much about attitude as music.

“There was a long stretch that anything that was slightly traditional or had guitars of any kind—my dad would just reduce it as ‘another Jethro Tull,’” Julia said in a recent interview.

And things would get uglier than a bleeding “far out” if you dared ask for the new Fleetwood Mac album, Wax Trax’s Duane Davis once told this reporter in a story for Billboard.

Still, Wax Trax in Denver, and later in Chicago, would become an epicenter for the burgeoning punk movement, new wave and the historical antecedents that made it all possible.

The Wax Trax tale is also a love story of two men whose passion for iconoclasm and alternative music were as wedded as the life partners themselves. Their child—Wax Trax—would become not just an outcast record store, but a community center, a lifestyle, and finally an independent record label.

“It also was a very safe place for people to come in and hang out,” Julia said. “You could drink, smoke, listen to music. Why wouldn’t you want to gather there? Wax Trax never kicked anyone out or made people feel rushed to leave. Often the doors would be locked at the end of the night and the keg would come out from the back, which kept the party going.”

Partners Jim Nash and Dannie Flesher had met in San Francisco the early 1970s—while Jim was still married, with two children, including the filmmaker who has now documented the wild and sometimes highly personal ride in Industrial Accident: The Story of Wax Trax Records.

The documentary version of the long and eccentric story plays the Denver Film Festival, Friday and Saturday, Nov. 9-10, at Sie Film Center, 2510 E. Colfax Ave. In-person guests will include Julia Nash, Jello Biafra and the band Ministry’s Al Jourgensen, among others.

From the beginning, Wax was way off the beaten Trax. Jim and Dannie launched their dream store, quite literally, with their own eclectic record collection.

“They had been on the hunt at every ﬂea market and thrift store for a while to pad the inventory,” Julia recalled. “In addition to peppering in their own collection, they signed up for as many Columbia House penny-a-record clubs they could swindle to get more stock.”

For a generation used to downloading music from nowhere, the musical Wax Trax story will be eye-opening—as well as ear-opening. The original Wax Trax was not so much a retail space as a cultural destination for the likeminded, especially in the store’s ‘70s and ‘80s heyday.

For Jim and Dannie, Wax Trax was not just a business—it was life. In an age before marginalized music was a click away on a computer, the store’s mail-order services were a kind of salvation to people who thought they were alone on the fringes.

“My dad and Dannie’s profound love and passion for music and culture affected so many people around the world,” Julia said. “… Wax Trax was a world that made them feel not so alone. …

Whether it was internal LGBT identity or growing up in a community in the Bible Belt, or just trying to ﬁnd the courage to be themselves, Wax Trax became a lifeline to many people.”

Bored in the Mile High City, the partners eventually sold the Denver store to social workers Duane Davis and Dave Stidman and moved operations to Chicago in 1978, exposing the Windy City, for the first time, to such seminal post-punk bands as Joy Division, Bauhaus and the Jam.

Like most things with Wax Trax, its transformation into a concert venue and record label was less a business decision than a child of organic reality when the store wanted product on the shelves by underexposed bands. After producing small runs of quasi-bootlegs, Wax Trax became a legitimate label in 1980, signing—well, actually not signing—the likes of Ministry, KMFDM and drag-queen Divine.

“The art created was a result of the culture of absolute freedom and hands-off respect that was given each artist,” Julia said of Wax Trax’s handshake deals. “… I guess [it] might depend on if you expect the end result to be art or a sustainable business. Each are equally important, but as history tells us, Wax Trax wasn’t able to do both.”

It was as much personal issues as shaky business models that finally melted Wax Trax—at least the Chicago-based label and store. The Denver location survives.

While the label felt the growing pains of a 1992 sale to TVT Records, the health of both founders took its toll. As the business faced bankruptcy and slowly moved further from their own direct control, both Jim and Dannie died of AIDS-related complications in 1995 and 2010, respectively.

Still, the legacy lives on, as is clear from this loving documentary.

But was it all really just an “industrial accident”?

“Yes, it absolutely was,” Julia said. “However, ‘accident’ was not meant primarily as a negative. Much of what Wax Trax did was exploiting unplanned moments. … There was no master plan. That doesn’t mean it was easy or things fell into their lap. My dad was one of the hardest workers I have ever met and expected the same from everyone else, including me.”