Home Music NotesMUSIC NOTES: And in the End – of The Road: Abbey Road 2019 – Beatle Brunch 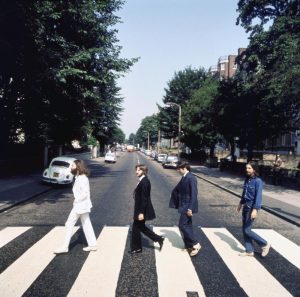 By Joe Johnson, Beatle Brunch | Beatle Brunchers! We’ve chosen this Fab pic of The Boys walking in the opposite direction than they did on the original Abbey Road album cover shot back in September of 1969 for a reason. In this case, they are actually headed TOWARD Abbey Road Studios instead of walking away from it, as was the case in the original album cover photo. Perhaps they forgot “Something” and needed to retrieve it.

Giles and assistant Sam Okell were able to present the full album anew, but also bring out some treasures we always knew existed, like what the medley on side-two sounded like with “Her Majesty” inserted between “Mean Mr. Mustard” and “Polythene Pam”. It didn’t sound good and McCartney nixed the idea, insisting the sound engineer cut “Her Majesty” out of the medley, and because the EMI staff were always told “never throw out ANY Beatles recordings”, the song was fronted by 14-seconds of leader take and edited to the very end of the album. The Beatles LOVED hearing that “Easter Egg” at the end of the album and decided to leave it in.

Of course in 2019, Abbey Road has been remixed and re-released in editions that include bonus tracks and alternate studio takes, like take-7 of “The Ballad of John and Yoko” featuring ONLY John and Paul. In this take, John says, “you’ll have to go a little faster Ringo”, to which Paul replies, “OK George”.

Photo: Thankfully 50 years later, Giles Martin (son of George) took that walk back, too, and returned with the 2019 mix of the album, bringing it back to studio clarity by remixing and remastering (again) the band’s final recording (Let it Be was actually recorded before Abbey Road, but released later).

Previous:
INTERESTING BITS: Steven Tyler Admits It Took Him ‘Many Years’ to Overcome Anger After Aerosmith Sent Him to Rehab
Next:
BUSINESS NEWS: The Latest Denver Artist to File Suit Against Meow Wolf Speaks Out