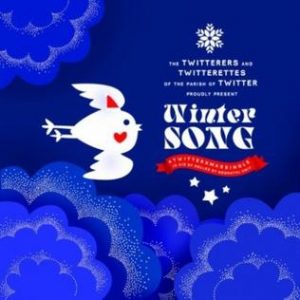 Cover art for Winter Song single by the artist Twitterxmassingle. The cover art copyright is believed to belong to the label, Holles Street Neonatal Unit, or the graphic artist(s).

Editor’s note: After watching tons of commercials on television during the holidays, I commented on Facebook that I thought the BEST commercial was Toyota’s “Snowmen Saluting Returning Serviceman Dad.” So poignant, so moving. And a great reminder that we enjoy so many freedoms in this country because of our armed forces service people.

“Winter Song” is a seasonal song co-written and co-sung as a duet by Sara Bareilles and Ingrid Michaelson. Although considered by many to be a Christmas song, no explicit reference to the holiday can be found in its lyrics. It appeared on the holiday compilation album The Hotel Café Presents Winter Songs by various female artists, released in 2008 through Epic Records. It became a minor hit in Canada in 2008, reaching number 97. Upon release in Ireland in 2011, it reached number two for two weeks. A special charity single by #twitterxmassingle also was a separate hit in Ireland alongside the original version, reaching number eight.

The song (full name on single sleeve Twitterers and the Twitterettes of the Parish of Twitter Proudly Present Winter Song) became a charity single in Ireland released simultaneously with the original.

The idea started with a single tweet from account holder @BrendaDrumm on the social networking site Twitter on 19 November 2011. An account was established at #twitterxmassingle to garner support for the idea. The co-writers also supported the project. 140 people from Ireland took part in recording it in a grand hall in Westin Hotel in Dublin on one Sunday on 27 November 2011 exactly one week from the tweet. The instrumentation was recorded at Ian Callanan Studios, with Callanan as producer and musical director, Brenda Drumm as executive producer and Paul Keegan as engineer and mixing.

The single (also known as the “TWinter Song”) and the accompanying video were launched on an independent label on 4 December 2011 and through iTunes downloads. The single entered the Irish Singles Chart at number eight on the chart dated December 8, 2011, while the original by Sara Bareilles and Ingrid Michaelson rose to number two the same week. All proceeds of the charity recording went to the Neonatal Unit of Holles Street Hospital in Dublin, Ireland.