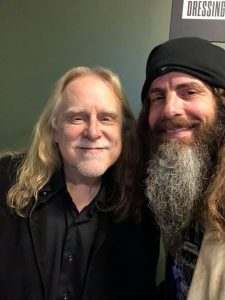 From Ryan Chrys on Fb, 12/06/19: Incredible night of music in Colorado. I’m so proud of the Colorado musicians that performed throughout the night and to Freddy for his induction, he and his band along with Chris Daniels kiiiiiiilled it!

Jock Bartley and company destroyed as well it was such a treat to see Jock tearing it up and coming back and tearing it up into tinyer pieces again on slide! I’m convinced Hazel Miller is an angel and her and her crew sang behind it all like clouds of heaven. I was such a fanboy and everyone was so gracious and kind.

[Warren] Haynes and [Joe] Bonamassa (on Tommy Bolin’s guitar) leveled the place. Joe was nice and hung out and Haynes was a total bro! What a cool guy. Tommy’s tribute band slayed; Lucas Parker stepped it up! Jeff Cook on fire, and Otis and Cassie Taylor were a highlight. So good!! Joey Porter from Motet – so right on, man!

Too many wonderful friends and folks to name, just a glorious raging night of Colorado music.

Tommy Bolin’s meteoric assent to fame began with his role as guitarist for Zephyr; in addition to working as a solo artist, he later replaced Joe Walsh in the James Gang, and worked with Deep Purple and such jazz-fusion icons as Billy Cobham (at the age of 22, Bolin played on Cobham’s award-winning album Spectrum). He passed away in 1976, but his music lives on.

Zephyr, with Candy and David Givens, John Farris, Robbie Chamberlin and Tommy Bolin, produced the first psychedelic-rock superstars to come out of Colorado in the 1970s. (Candy Givens has often been compared favorably to Janis Joplin, and Zephyr’s appearances with Jimi Hendrix were highlights.) The band’s song “Going Back to Colorado” inspired the title for the Colorado Music Hall of Fame Class of 2019 induction.

Boulder-based Otis Taylor is one of the world’s most prolific blues artists and the founder of the Trance Blues Festival. He’s the winner of multiple W.C. Handy awards, and has inspired young blues artists and fans alike to explore the role of race and oppression in the music.

Freddi Gowdy and Henchi Graves were part of a wave of late ‘60s soul/rock era acts like Sly and the Family Stone. They came to Colorado in 1970 as Freddi Henchi and the Soulsetters, and for thirty years the Freddi & Henchi “party” was the best soul review in the area.

Concert promoter Tony Spicola owned KDZA-AM, Pueblo’s powerhouse radio station. He brought The Who to Colorado for their first-ever appearance in the state, and subsequently booked concerts by Ike & Tina Turner, Buffalo Springfield, the Yardbirds, the Everly Brothers and so many more. In the ‘80s he sparked a music renaissance in southern Colorado, and his infamous “Val Halen Brown M&M Concert” at USC Pueblo made MTV’s Top 12 Roughest Nights in Music History.

The late Wendy “Rock & Roll” Kale started her music career as a publicist for the CU Program Council; her music writing helping ignite the careers of Big Head Todd & The Monsters, The Samples, Chris Daniels and many more.

The Colorado Music Hall of Fame:

The Colorado Music Hall of Fame presented by Comfort Dental is a non-profit created to honor individuals and organizations that have made outstanding contributions to the music scene, to preserve and protect the history of the scene, and to educate the public regarding everything that is great about Colorado music

Colorado has a rich musical history. Nowhere is this more apparent than in the contributions of legendary music promoter Chuck Morris, and 97.3 KBCO that got its start in Boulder, Colorado. Morris and 97.3 are set to be inducted into the Colorado Music Hall of Fame presented by Comfort Dental this December 3rd at the Paramount Theater. Read on to learn more about these two titans of the Colorado music scene and get tickets to be part of this historic community event.