MUSIC NOTES: The Resilient: Band of Veterans Healing Through Music 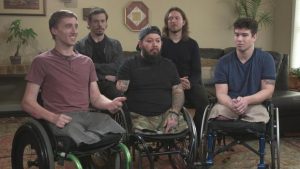 The band The Resilient (from CBS News)

We felt this was very important to pass along to our readership. The video tells a lot and we know there is someone out there who would love to help these guys out. Please watch!

“We just wear our scars on the outside”: Band of wounded warriors healing through music

By David Martin, CBS News | Bethel, Pa. — In a house in the woods in the middle of Pennsylvania, some of the most important music in America is being played by a band called The Resilient. But you don’t need to be a music critic to say that. All you have to do is look.

Nate Kalwicki on guitar lost his right leg in Afghanistan. Marcus D’Andrea on bass lost both legs. So did lead vocalist Tim Donley. Juan Dominguez lost both legs and an arm, yet somehow plays the drums with a special pedal and drum stick. He’s not some novelty act.

“I am a drummer. I am the drummer for The Resilient and we’re gonna do big things,” Dominquez said.

The only member of The Resilient with all his body parts is Greg Loman, a professional musician who met the others in their darkest hour, searching for a purpose in life while recovering from their wounds.

“Through the recovery we all discovered this really intense passion for honest musicianship and they’ve all gotten so good,” Loman said.

The house where they play belongs to Donley, which was made handicap accessible with doorways wide enough for wheelchairs.

“It gets a little ridiculous. It’s like bumper cars,” Donley said.

He writes the songs as well as sings them. One of his lyrics says, “I want you like i’ve never wanted anything but truth.” That says it all about falling in love with his wife Kelly and coming to grips with his wounds.

“We just wear our scars on the outside whereas most people have, you know, they’ve got all their own messed up stuff going on inside,” Donley said.

Some of his lyrics tell you of the dark places they’ve been. But Kalwicki said he wouldn’t go back and “change things.”

“It just shifted the, the course of my life,” he said.

“There’s a contentment and kind of like, an excitement to knowing, that, like, i’m where i’m supposed to be,” Donley said.

The Resilient are working on their first album. But they expect to just get better and stronger.

“There’s something about it, that just, the motivation, the drive, the just the soul of it. It doesn’t feel it can go anywhere but up,” Donley said.

Learn more about The Resilient. The band will next play at the Redneck Country Club in Houston, April 12, 2019.