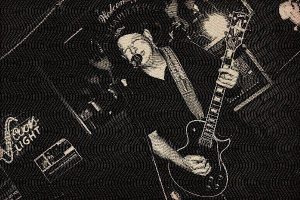 Hello everyone! Welcome to my very first column for the COMBO Newsletter!
Glad to be a part of it! Here I will be sharing stories and facts in the music world,
past and present. In addition, I will be sharing tips and advice from experts for
bands and musicians. I am a long time guitarist/vocalist, and have had a love
for music all my life.

For the first article, I thought I would share a great moment in my musical life.
Back in 1985, I was a photography student at the Colorado Institute of Art.
The teacher was asking for location suggestions for a photo shoot for the class.
I suggested going to the world famous Caribou Ranch Studios in Nederland, Colorado.
The teacher liked the idea, so I called the studio up and they agreed to it.

Caribou Ranch was one of the most important studios in the history of Rock and Roll.
In 2017, it was inducted into the Colorado Music Hall of Fame. Located in
Nederland, Colorado with some of the most beautiful mountains and scenery
you have ever seen. The band Chicago’s producer, James W. Guercio, created it.
An incredible amount of bands recorded there including Chicago®, Elton John,
John Lennon, Dan Fogelberg, Stevie Nicks, Don Henley, Glenn Frye, a seemingly
never-ending list!

A very nice woman from the studio met us there and gave us the grand tour. Starting
by showing us some of the cabins around the studio where the stars would stay while
recording their albums. She showed us the cabin Michael Jackson stayed in during
his “Victory Tour” stop in Denver. It had had a grand piano in it! She then showed us
the dining hall. The kitchen was available 24/7 (as were all services there) including
recording at all hours. The fully stocked game room had pinball machines and other
games including darts, pool tables, etc.

Lastly, she showed us the main recording room that was large. Cords, mics, and amps
set up. There was a Bosendorfer grand piano in the room as well. A guitar amp was
set up and miked. To our surprise, there was a recording session going on.

Next, we go upstairs to the control room, and she shows us the cream of the crop
recording equipment. Anchored by the world famous Neve soundboard, which was one
of two in the world she said. It sounded amazing. There was a sound engineer, record
producer, and guitarist. The guitarist was great. They recorded half the guitar lead of
the song on a Stratocaster, then the producer told the guitarist to switch to the Les Paul.
The producer was in charge. The recording engineer was incredibly talented.

Thanks very much for checking out my first article and allowing me to share a personal
experience! I love all things about music. Next month I will be sharing tips and advice
from sound experts in helping local bands perform a proper sound check, and achieving
the best sound they can.

NEXT WEEK: Sound Check: Tips To Make Your Gigs Rock!

Previous:
REPORTS: ‘I Realised That No One in the Music Business Knew What They Were Doing’
Next:
BUSINESS NEWS: Music Teacher Tommy Harrison Prides Himself on Theory