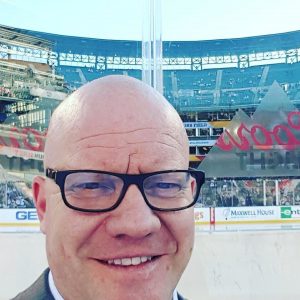 By Brian Maass, CBS 4 Denver | He has sung the same song 949 times over the course of 23 years, and it never gets old. Jake Schroeder, who sings the national anthem at Colorado Avalanche home games said, ”It’s a big deal to sing the national anthem, and I would be mortified if I messed it up.”

With Veterans Day at hand, Schroeder told CBS4 how and why he thinks of his father every time he sings the anthem.

“He set the tone for me doing the anthem and showed me why it’s important,” said Schroeder.

“Every time we were at the CU game, and the anthem played, my dad had tears running down his face. He didn’t talk to us about it, you know?” said Schroeder.
> > > > > > > > > >
Read the rest of the story here, along with videos and photos:
https://denver.cbslocal.com/2019/11/11/jake-schroeder-national-anthem-avalanche/