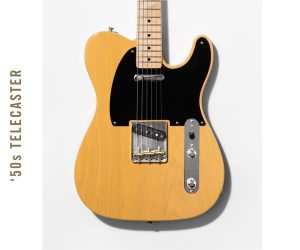 Fender Musical Instruments, the iconic electric guitar maker whose instruments have powered music from Eric Clapton to contemporary acts like Daniel Caesar, is replacing its biggest-selling lineup of guitars as its sales tick up.

The Hollywood guitar maker is replacing its entry-priced Standard series of Stratocasters and Telecasters that it has sold for more than 25 years with a new Player series, tweaking nearly all their features. Fender plans to keep making the instruments in Mexico, CEO Andy Mooney told Reuters. While the company still builds its priciest guitars in the United States, the Mexican-made instruments sell the most units.

Fender is keeping the same basic shapes the guitars have had since the 1950s and 1960s, a smart move, said Brian Majeski, editor of the Music Trades, which gathers data on the instrument industry, because changes to classic designs can be fraught in the guitar business. Fender’s chief rival, Gibson Brands Inc, installed computerized tuning machines on its instruments in 2015, a move that did not go over well with players.

A drop in sales, along with Gibson’s ill-fated purchase of a consumer electronics business, contributed to its bankruptcy filing last month with $500 million in debt.

Fender, by contrast, overhauled instrument details like the feel of the frets under a player’s fingers and the electronics that reproduce the guitar’s sound but skipped digital add-ons.

Fender “has these guitars that are just deeply woven into our musical culture,” Majeski said. “They’re not trying to turn them upside down.”

Fender made several moves in recent years to reach new players without sweeping changes to its core product. Last year, it launched software for online lessons to help retain players who give up after purchasing their first instrument.

Mooney told Reuters the software now has 50,000 active users on the $9.99 per month service. Mooney has also spearheaded an effort to get more women into Fender’s marketing and artist sponsorship campaigns after company research revealed nearly half of first-time guitar buyers are women.

Privately held Fender does not disclose financials, but Mooney told Reuters it made slightly more than $500 million in revenue last year, has about $100 million in debt and is cash-flow positive. He said revenue growth was in the “high single digits” and outpaced the industry-wide sales growth rate for fretted instruments, which grew 7.3 percent to $1.9 billion, according to Music Trades data.

“We listened very intently to what our customers told us we need to do,” Mooney said, “and their preferences do change over time.”

Related video: How Fender Guitars Are Made (provided by Refinery29)