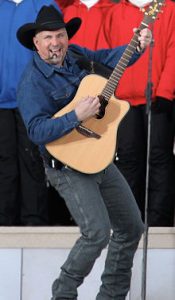 Fans who have yet to be able to order his vinyl collection, which includes three boxed sets, on Friday, April 12, at 11 a.m. EST, when the country singer will hold another talkshoplive stream.

Brooks proved his selling power during his first-ever vinyl collection’s initial two pre-order windows: During the first 18-hour opening, he sold 420,000 vinyls and, during the second 24-hour period, he sold another 300,000. That brings his current total vinyl sales to 720,000 in less than 48 hours.

Brooks’ Legacy Collection will only be produced once, taking over eight months to manufacture in over four countries, with each box being hand-packed. The three boxed sets are The Limited Edition, The Original Analog Edition and The Digitally Remixed/Remastered Edition. Each set includes five albums: No Fences, The Chase, In Pieces, Fresh Horses and Triple Live, in addition to companion CD’s. That makes the total seven vinyl albums and seven CD’s in each set.

Previous:
NEWS: Garth Brooks Has Broken The Broncos Stadium at Mile High Ticket Sales Record
Next:
EVENTS: COMBO’s Next General Meeting April 22nd on “Is Vinyl Coming Back? Are CDs Still Viable? What Media is Best for YOU?”