Home NewsNEWS: John Williams on Reworking the Classics – His Own

NEWS: John Williams on Reworking the Classics – His Own 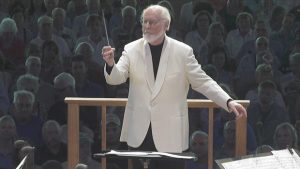 By Tracy Smith, CBS Sunday Morning | In the hills of western Massachusetts, the mid-summer breeze carries the scent of honeysuckle and the sound of genius. This is Tanglewood, the summer home of the Boston Symphony Orchestra and of its best-known artist-in-residence, John Williams.

The maestro actually lives in Los Angeles, but he says Tanglewood is where he’s done some of his best work. “Its effect on me is very spiritual and very exciting,” he said. “And I’ve written so much music here, so many film scores in this place. Right here, I come every summer – ‘Star Wars’ films, ‘Indiana Jones’ and ‘Schindler’s List,’ ‘Harry Potter,’ a great percentage of that work done physically here.”

And what astonishing work it is.

Williams is the most-honored movie composer of all time, with five Academy Awards (so far). And he has 51 Oscar nominations, more than any other living person. Only Walt Disney has more.

“I know you’re a very modest man…” said correspondent Tracy Smith. “But do you ever allow yourself that moment to step back and say, ‘Wow. Look what I’ve done!'”

“Tracy, I’ll be completely honest with you: It’s very hard for me to take complete pleasure in anything that I’ve made,” Williams replied. “You can love it and you can love it all, but you can always see things that could be improved.

“I wish I had the kind of personality I could say, ‘Ah, this is fantastic.’ But I don’t think it’s that – in the art of music, I don’t think there’s any place for that kind of vanity. I don’t know who else could possibly feel that way given the shoulders we stand on.”

“But your shoulders are pretty broad and strong at this point. You’re part of that foundation now.”

“Well, I couldn’t get into the NFL!” he laughed.

Go here for the full article and corresponding videos:
https://www.cbsnews.com/news/john-williams-and-anne-sophie-mutter-on-across-the-stars/