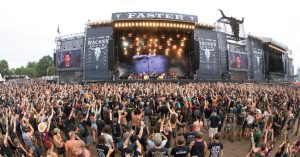 In this Aug. 4, 2018 photo numerous festival goes stand in front of the main stage of the heavy metal festival in Sacken, northern Germany. (Daniel Reinhardt/dpa via AP)

BERLIN (AP) — The story making social media rounds of two elderly men escaping their retirement home to attend Germany’s largest heavy metal festival seemed too good to be true. And, alas, it was.

Itzehoe police spokesman Peter Berndt said Tuesday the two men were actually 58 and 59 and left a home for people with mental health issues to party Friday night in the town of Wacken, near the eponymous festival. [This is the part that changes the whole story…]

Festival-goers called police after finding the two “helpless, disoriented and intoxicated” waiting for a bus home at a main street stop after the buses had stopped running at 3 a.m. Saturday.

Police brought them to a first-aid station and then later in the morning sent them home in a taxi arranged by the care home about 30 kilometers (20 miles away).

CORRECTION TO THIS STORY – DARN!
2 Elderly Men Sneak Out of Nursing Home to Attend Heavy Metal Music Festival in Germany

You’re never too old to rock out! Two elderly German men proved this to be true when they snuck out of their nursing home to attend the Wacken Open Air music festival, which is considered the biggest heavy metal festival in the world.

The men didn’t go unnoticed, however, as the nursing home called the police to report them missing, according to a news release by the Itzehoe Police Department.

Police finally found the two headbangers 25 miles from their nursing home at the music festival at about 3 a.m. where Merle Neufeld, a police spokesperson, told German outlet Deutsche Welle they were “disoriented and dazed.”

The release mentioned the two men were, however, “reluctant to go home.”

Peter Berndt, another spokesperson for the police department, said the two men likely made it to the festival by foot and public transportation, according to the Washington Post.

“They were then taken to the medical tent on the festival site and were sent back by taxi at around 6:30 a.m.,” Berndt told the newspaper. “We had to explain to them why they had to go home — but in the end, they went back voluntarily.”

Some of the bands performing at the festival this year include Judas Priest, Arch Enemy, Cannibal Corpse and Die from Sorrow.

The Twitter account for the Wacken Open Air said it didn’t discriminate against seniors when a fan alerted them to the news.

“#translationtime “Assisted wacken. No discrimination of seniors.” Of course not, we might add. Because you’re never too old [to] rock out #wacken #metalfamily #respect #buildingbridges,” the tweet read.