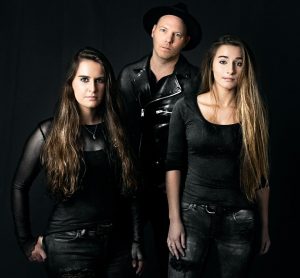 “Oblivion” is a beautifully layered and theatrical slow-burn that builds with stirring harmonies and intense instrumentals. It has all the makings of a sci-fi or superhero blockbuster movie soundtrack.

“When I first met the Neoni sisters, I saw an insane amount of raw vocal and writing talent,” says Wolf. “They work hard and have a strong vision for songs, but aren’t afraid to try things multiple times and do re-writes to get it right. We wrote ‘Oblivion’ on our second writing session in early 2019, but it took us months to get the right version of the song. Ultimately, we decided to have all three of us singing on it. This version felt like the clear winner out of the others.”

“The more we’ve reflected on this song, the more we realize how many ‘Oblivion’ moments we all face in our lives,” says Neoni. “For us it feels very personal and real in our lives as sisters and as a band. And we have family and friends that are headed to college, have lost loved ones, one just got married and another had a kid. It’s like we are all saying, ‘I have no idea how this is going to turn out, but here we go!’ It feels like if there was a motto for living, that would be it. Literally every one of us faces these moments in our lives.

“For us having the opportunity to capture that feeling in a song with Zayde Wolf definitely makes the fear seem to ‘own us’ less,” they add. “So when Dustin called and said he wanted to collaborate with us on ‘Oblivion’ it felt like our brains were going to explode with excitement. And after hearing that signature Zayde Wolf vocal tone on the track it just provided that extra shine to the song and really deepened the emotion.”

About the author Brian Leak: I am an entertainment journalist and photographer currently living in the Napa Valley region of northern California. With a focus on music, film and the video game industry, my writing and photography work has appeared in Billboard, Noisey, Loudwire, Alternative Press, Rue Morgue and many other outlets. I’m the former editor-in-chief of two separate publications, but found in those experiences that my true passion is specifically in telling artists’ stories and capturing moments with a camera. In my time as a journalist, I’ve had the privilege of interviewing such icons as Oscar Winner Jeff Bridges, Tony Hawk, Beach Boys’ Brian Wilson, and the Master Of Horror, director John Carpenter.