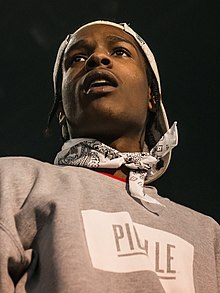 By Tony Diver, The Telegraph | The rapper A$AP Rocky has been convicted of assaulting a man in Sweden and handed a suspended prison sentence.

The US rapper, 30, was arrested after a violent incident took place on June 30 on the streets of Stockholm between Rocky, two members of his entourage and two other men including Mustafa Jafari, a 19-year-old Afghan immigrant.

The fight broke out when Mr Jafari accused Rocky, whose real name is Rakim Mayers, of breaking his headphones.

The artist pleaded self-defense and said he had tried to avoid a confrontation with two men who he said were persistently following his entourage.

One of them picked a fight with one of Mayers’ two bodyguards, the rapper told the Stockholm District Court.

But the court ruled that the three were “not in a situation where they were entitled to self-defence”.

It also convicted two members of A$AP Rocky’s entourage of the same crime.

Mayers “assaulted the victim by hitting and kicking him as he lay on the ground. The artist has also thrown the victim to the ground and stepped on his arm,” the court wrote in its verdict.

The sentence means that the three face no prison sentence in Sweden unless they commit a similar offense in the country again.

The case gained international attention when Donald Trump tweeted that Mayers should be released, and questioned the fairness of the Swedish legal system.

Mr Trump said he would call the Swedish Prime Minister to “see what we can do about helping A$AP Rocky”.

After the rapper was released pending the court’s verdict and allowed to return to America, the US President tweeted: “Get home ASAP A$AP!” [GROAN…]

Mr Jafari will receive damages for violation of his integrity, pain and suffering, the court ruled.

“In an overall assessment the court finds that the assault has not been of such a serious nature that a prison sentence must be chosen” the court said in a statement.

“The defendants are therefore sentenced to conditional sentences.”

Mayers, was detained on July 3 in connection with a street brawl on June 30 and charged with assault causing actual bodily harm.