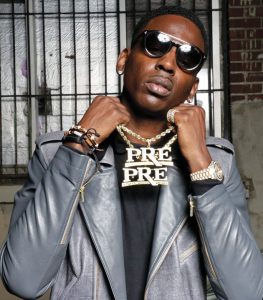 Rapper Young Dolph has been hospitalized after being shot repeatedly in Hollywood, Fox 11 LA reports. It’s not currently known what condition the rapper, whose real name is Adolph Thornton Jr., is in. He was shot near the intersection of Hollywood Blvd. and Highland Ave., a major intersection popular with tourists that is close to landmarks like the TCL Chinese Theater and El Capitan Theater.

A spokesman for the Los Angeles Police Department would not confirm the identity of the shooting victim to TheWrap, but said the shooting took place at approximately 1:12 p.m. on Tuesday. There was only one victim.

The LAPD spokesman told TheWrap that there was no suspect in custody. However, according to Fox 11 LA, police were looking for a gold Cadillac Escalade SUV in connection with the shooting.

Young Dolph, whose most recent full-length studio album “Bulletproof” was released in April, has reportedly been targeted by gunfire before. According to the Charlotte Observer, the rapper boasted that the SUV he was traveling in during a shooting in Charlotte, North Carolina, had been reinforced to be bullet-proof.

That shooting occurred on Feb. 25. The Observer said Charlotte-Mecklenburg police would not immediately confirm or deny Young Dolph’s involvement, but later tweeted that they were exploring the possibility that groups in the entertainment industry were involved.

Young Dolph, 32, was born in Chicago but is based in Memphis. He released his debut album, “King of Memphis,” last year.

By Tim Kenneally | The Wrap

Arrest Made in Shooting of Rapper Young Dolph

A man was arrested Wednesday after rapper Young Dolph was shot and critically wounded outside a landmark Hollywood hotel and detectives are investigating whether he was targeted as part of a hip-hop rivalry.

The 32-year-old rapper from Memphis, Tennessee, whose real name is Adolph Thornton Jr., was confronted by three men outside the Loews Hollywood hotel Tuesday afternoon. A fight broke out and after Dolph fell to the ground one of the men pulled out a gun and shot him, leaving him critically injured, police said.

Corey McClendon, 43, was detained near the scene and then arrested on suspicion of attempted murder, said Officer Irma Mota, a Los Angeles police spokeswoman. Police were still looking for at least two other suspects.

Dolph was “targeted because of who he is and some kind of beef that’s ongoing,” Los Angeles Police Chief Charlie Beck told KABC-TV on Wednesday. “I think this was something he brought with him from across the United States.”

Yo Gotti, another Memphis rapper, has a long-running feud with Dolph. His name hasn’t surfaced in connection with Tuesday’s shooting, though he and McClendon were implicated in a prior shooting. Dolph has said the feud started in 2014 after Gotti tried to get him to sign a record deal.

Since then, the two have taken jabs at each other in albums and on social media.

Gotti, whose real name is Mario Mims, and McClendon were arrested on aggravated riot charges in 2010 after five men were shot in a parking lot of a Memphis nightclub.

Sheriff’s officials said at the time that Gotti had been involved in an argument with another rapper before the shooting. The charges were later dropped for a lack of witnesses, prosecutors said.

This is the second shooting this year involving Dolph. He escaped injury in February after his SUV was hit with a barrage of bullets in Charlotte, North Carolina. Investigators recovered more than 100 shell casings that had been fired from various guns at several homes and vehicles.

The rapper later said he had custom bulletproof panels on the SUV. He released an album in April titled “Bulletproof” that referenced the shooting. It ranked No. 36 on the Billboard 200 album chart.