Home NewsNEWS: Rolling Stone, Once a Counterculture Bible, Will Be Put Up for Sale

NEWS: Rolling Stone, Once a Counterculture Bible, Will Be Put Up for Sale 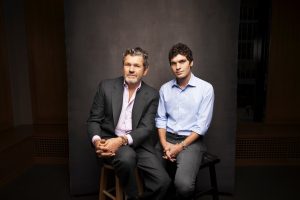 Jann Wenner, left, and his son, Gus (Photo by Jesse Dittmar for The New York Times)

From a loft in San Francisco in 1967, a 21-year-old named Jann S. Wenner started a magazine that would become the counterculture bible for baby boomers. Rolling Stone defined cool, cultivated literary icons and produced star-making covers that were such coveted real estate they inspired a song.

But the headwinds buffeting the publishing industry, and some costly strategic missteps, have steadily taken a financial toll on Rolling Stone, and a botched story three years ago about an unproven gang rape at the University of Virginia badly bruised the magazine’s journalistic reputation.

And so, after a half-century reign that propelled him into the realm of the rock stars and celebrities who graced his covers, Mr. Wenner is putting his company’s controlling stake in Rolling Stone up for sale, relinquishing his hold on a publication he has led since its founding.

Mr. Wenner had long tried to remain an independent publisher in a business favoring size and breadth. But he acknowledged in an interview last week that the magazine he had nurtured would face a difficult, uncertain future on its own.

The sale plans were devised by Mr. Wenner’s 27-year-old son, Gus, who has aggressively pared down the assets of Rolling Stone’s parent company, Wenner Media, in response to financial pressures. The Wenners recently sold the company’s other two magazines, Us Weekly and Men’s Journal. And last year, they sold a 49 percent stake in Rolling Stone to BandLab Technologies, a music technology company based in Singapore.

Both Jann and Gus Wenner, the president and chief operating officer of Wenner Media, said they intended to stay on at Rolling Stone. But they said they also recognized that the decision could ultimately be up to the new owner.

Still, the potential sale of Rolling Stone — on the eve of its 50th anniversary, no less — underscores how inhospitable the media landscape has become as print advertising and circulation have dried up.

“There’s a level of ambition that we can’t achieve alone,” Gus Wenner said last week in an interview at the magazine’s headquarters in Midtown Manhattan. “So we are being proactive and want to get ahead of the curve.”

Read the full article at the link below.

Previous:
BUSINESS NEWS: Lane 8 Doesn’t Let His Fans Use Their Phones at His Shows — and They Love Him For It
Next:
KUDOS: And the First Ever Emmy for Music Supervision Goes to… a Woman