Home NewsNEWS: Soulja Boy Sentenced to 240 Days in Jail for Violating His Probation

NEWS: Soulja Boy Sentenced to 240 Days in Jail for Violating His Probation 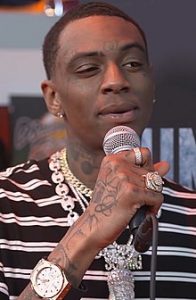 By Kendall Trammell and Sarah Moon, CNN | Rapper Soulja Boy will serve 240 days in jail for violating his probation, according to Los Angeles County court documents.

Soulja, whose real name is DeAndre Cortez Way, appeared in court Tuesday. The judge gave him 40 days credit on the sentence for having been locked up the last 20 days.

It wasn’t immediately known what he did to violate his probation.

Way was convicted in 2014 for carrying a loaded weapon in a car in which he was a passenger and is barred from possessing guns or ammunition.

“My client is very thankful to the judge that he was sentenced to only 240 days because the judge was initially contemplating a sentence of two years,” said Fred G. Minassian, Soulja’s attorney.

“Once he’s released, he’s committed to follow all the orders and directives of the court and of the probation department,” Minassian said.

The “Crank That” star was also arrested in 2011 for pot and gun charges.

DeAndre Cortez Way (born July 28, 1990), known professionally as Soulja Boy Tell ‘Em, or simply Soulja Boy, is an American rapper, record producer, actor and entrepreneur. In September 2007, his debut single “Crank That (Soulja Boy)” peaked at number one on the U.S. Billboard Hot 100. The single was initially self-published to the internet, and later became a number-one hit in the United States for seven non-consecutive weeks starting in September 2007. On August 17, Way was listed at number 18 on the Forbes list of Hip-Hop Cash Kings of 2010 for earning $7 million for that year.

Previous:
SONGWRITERS’ CORNER: COMBO’s Featured Songs for May 2019
Next:
FEATURED MEMBERS: For May 2019 – Jamie Krutz and Isabelle Stillman