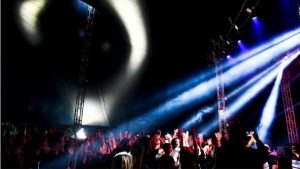 Swedish comedian Emma Knyckare is organizing a “man-free” music festival in her home country in response to rape and sexual assault claims at festivals.

She suggested the idea after reports of a number of sexual offenses at Sweden’s biggest music festival Bravalla, which has now been cancelled for next year.

“What do you think about putting together a really cool festival where only non-men are welcome?” she tweeted.

She said it would take place “until all men have learned how to behave”.

A day after her initial tweet, she confirmed plans for the event to go ahead, saying: “Sweden’s first man-free rock festival will see the light next summer.

“In the coming days I’ll bring together a solid group of talented organizers and project leaders to form the festival organizers, then you’ll hear from everyone again when it’s time to move forward.”

Knyckare, who is also a radio host, denied that banning men from her festival was unfair.

She told Sweden’s Aftonbladet: “Since it seems to be OK to discriminate against women all the time, maybe it’s OK to shut out men for three days? I would not exactly call it an abuse not to come to the festival.”

Police said they had received several reports of rapes and sexual assaults at Bravalla in the city of Norrkoping, following a similar spate of attacks at last year’s event.

The festival’s organizers said in a statement: “Words cannot describe how incredibly sad we are about this, and we most seriously regret and condemn this. We do not accept this at our festival.”

Mumford and Sons, who headlined last year’s event, said afterwards that they would not perform there again until safety had been guaranteed for female concert-goers.

There have been similar problems in England, with reports of two women being raped at last year’s Reading Festival.

In May, more than 25 music festivals in the UK turned off their websites for a day as part of a zero-tolerance campaign against sexual assaults.

The idea of “man-free” zones at festivals is not new. Last year, the Glastonbury introduced its first-ever women’s only venue called The Sisterhood.

Organizers said: “The producers of The Sisterhood believe that women-only spaces are necessary in a world that is still run by and designed to benefit mainly men.”
http://www.bbc.com/news/entertainment-arts-40504452

Sweden’s Bråvalla music festival has been canceled for 2018 after police received four reports of rape and 23 reports of sexual assault from Thursday to Sunday, according to the Guardian.

“I’ve had it,” Folkert Koopmans — founder and CEO of FKP Scorpio, the German production company that runs Bråvalla — said in a statement. “Violence kills the festival experience and the love for music, and — first and foremost: People are getting hurt. One is one too much!”

The first report came in Friday from a woman who said she was raped while Håkan Hellström, the festival headliner, was onstage, according to the Huffington Post. On Sunday, the Post logged the number of incidents at one rape and 11 sexual assaults, but that number seems to have risen since that report. Speaking to the Guardian, police chief Martin Hedberg told cited “weak descriptions” of suspects that come in after the fact, leaving police with relatively little information in their investigations.

The specter of sexual assault is becoming increasingly visible at music festivals worldwide, and the question of preventing misconduct is not a new one for Bråvalla. In 2016, five rapes and 12 sexual assault cases were reported at the festival. At another Swedish music festival held the same weekend — Putte i Parken in Karlstad — women attested to 32 instances of sexual assault, mostly in the form of groping by men.

“These were reports of women being touched in unwanted places, such as on their breasts and on their bottoms and inside their underwear,” Karlstad Police Department Inspector Leif Nystrom told the New York Times.

Bråvalla’s statement said the decision to cancel the 2018 event wasn’t about confining the problem to festivals or an inability to handle it; rather, it’s “about making a clear statement.”

“We do not accept [sexual assault] at our festival,” festival organizers said in the statement.

Sony Music, one of the big three global record companies, says it will start pressing its own vinyl releases again for the first time since 1989.

The firm will resume in-house domestic vinyl production at a Japanese factory south-west of Tokyo by March 2018.

At one time, the format had been expected to disappear after the rise of CDs, digital downloads and streaming.

During vinyl’s long decline from the late 1980s onwards, many vinyl record factories closed down, with production confined to a few specialist independent firms.

But this year, global vinyl revenue is expected to hit $1bn (£770m), with many consumers swearing by its supposedly superior sound quality.

They said the CD had killed it and that digital downloads had left it dead and buried: but vinyl is back. Sony, which played a major part in killing off vinyl by developing CDs, has seen them replaced in turn by other music technology such as downloads and streaming, but vinyl is increasingly popular once again.

The format has been saved by a resurgence in demand, as it attracts not only nostalgic older consumers, but also younger generations who have rediscovered records, especially in clubs and at music festivals.

Sony is even struggling to find older engineers who know how to make records. Part of the reason for the popularity of vinyl records may be that you can actually sell them in shops. In the UK, record sales brought in more money last year than streaming platforms – although the unit costs of vinyl is many times that of streaming.

Vinyl records have been growing in popularity again in recent years, boosted by events such as Record Store Day in April every year, for which record companies produce special limited-edition singles and albums.

Sony’s move comes a few months after it equipped its Tokyo studio with a cutting lathe, used to produce the master discs needed for manufacturing vinyl records.

It has not yet said which titles it will be pressing in vinyl, but big sellers in the format these days are a mixture of classic back-catalogue items and modern releases by new bands.