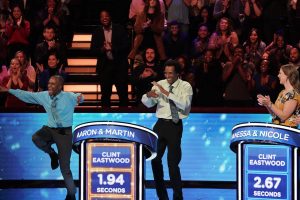 By Ellen Gray, Philly.com | A Temple University professor and his brother came from way behind to win $1 million in the season premiere Monday of Fox’s guess-the-music game show Beat Shazam.

“I’m sure it’s the greatest comeback in the show’s history. I don’t think anyone had zero that long,” Aaron Smith, an assistant professor of Africology and African American studies, said in a phone interview Friday. The Jamie Foxx-hosted show marked the beginning of its third season with the previously recorded, teacher-themed episode in which Smith was teamed with his older brother, Martin, who teaches math at a school in New Jersey.

For a good chunk of the show, the Smiths’ team seemed doomed, having won no money as two other teams of teachers ate their lunch. Foxx taunted them as the only African Americans in the competition for getting beaten in the category Motown.

“That was the only part of the show when I had genuine concern about how I would be received when I came home,” said Smith, who has built a reputation at Temple as the “rapping professor.”

What Foxx didn’t know, Smith said, was that “my grandfather owned a record store here in Philadelphia for over 40 years … which makes it even more tragic” that they were losing. “Because we kind of grew up visiting” the store.

It was called “Smith’s Records, on Cecil B. Moore Avenue, for 40 years, and he sold all this stuff: eight-tracks and 45s, and here we were, on national television, getting it all wrong.”

Until, that is, they came to the category of songs by Shania Twain, whom Martin Smith acknowledged only having heard of, before going on to answer enough questions correctly to pull them into the lead.

“At that point, I kind of knew that he was like playing the game. … He was using strategy and he wasn’t letting on certain aspects of what he knew,” Smith said of his brother. “He was really in his zone.”

Even before that, though, “I convinced myself that we had a chance,” he said. “I had to really trick my mind and say, no, we’re still here, we can do it, even though we were the only ones with zero points.”

The Smiths’ secret? “We studied a little bit, but we had such diverse tastes in music. Like, he was listening to ‘Jump’ by Van Halen, and the J. Geils Band, and I was listening to Run-DMC. I mean, we do not like the same types of music. [There’s a] slim overlap, maybe around the Billy Joel, Cyndi Lauper” period of the 1980s, “but that’s about it,” he said.

Smith told Foxx his share of the money would help his family. His wife had to leave her job after a car accident left her with a concussion. The couple have a son and daughter. Martin Smith’s plans include helping to pay for his daughter’s college education.

“It’s a blessing, a life-changing blessing,” Aaron Smith said, adding that beyond the money, it gave the brothers an opportunity to spend time together.

Asked whether there was ever a moment when the pair thought of not risking half their earlier winnings to go for the $1 million top prize, Smith said he couldn’t speak for Martin, but that he’d always been inclined to go for it.

And will his brother ever let him forget that it was Martin, not Aaron, who answered the $1 million question?

Hosted by Jamie Foxx, “Beat Shazam” is an interactive game show that pits teams of two against the clock and each other as they attempt to identify the biggest hit songs of all time. In the end, the team with the most money banked will go against Shazam, the popular song identification app, for the chance to win up to $1 million. Actress, model and writer Corinne Foxx, daughter of Jamie Foxx, acts as the show’s DJ.

[Editor’s note: Although they didn’t win the million, a couple of Rabbis of the Jewish faith won $180,000 this week!]