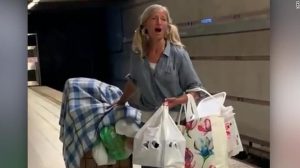 Emily Zamourka singing while pulling her cart – gets good news!

UPDATE: Viral Homeless Subway Singer Offered Major Recording Contract | By Nadine DeNinno, NYP | How do you get to Carnegie Hall? Sing in the subway, apparently. | A homeless Russian singer who went viral for her incredible performance just scored a major record deal.

Emily Zamourka, who captured the hearts of Los Angeles subway riders and internet fans, has been offered a recording contract, TMZ reports.

Grammy-nominated music producer Joel Diamond tells TMZ he drafted an offer letter for Zamourka in the hopes of making a “huge classical-EDM crossover hit record for the subway soprano.”

Homeless Woman Who Went Viral for Singing Opera in L.A. Subway Speaks Out

By Kelly Woo, Yahoo Lifestyle | A homeless woman in Los Angeles, Calif. has become a social media sensation for beautifully singing opera in a subway station.

Local news channels identified the woman as Emily Zamourka, 52, a classically trained violinist who immigrated from Russia 28 years ago. Exorbitant medical bills forced her onto the street, where she began performing to earn money.

“4 million people call LA home. 4 million stories. 4 million voices…sometimes you just have to stop and listen to one, to hear something beautiful,” the LAPD wrote.

The video went viral, causing Twitter users to clamor for her identity and sending local reporters to seek her out.

Zamourka came to the United States at the age of 24 and taught violin and piano lessons. She also used to play on the street in downtown Los Angeles before her instrument was stolen. Then, she suffered illnesses and the medical bills piled up.

“That’s when I became homeless. When I could not actually pay any of my bills and could not pay anymore of my rent,” she told ABC7.

“I am sleeping actually on the cardboard right now, in the parking lot,” she continued. “I am sleeping where I can sleep… I have people that feel sorry for me, but I don’t want to be a burden to anybody.”

While her violin was stolen, Zamourka could still rely on her gorgeous vocal instrument and she’s been enthralling L.A. subway riders for years.

As she explained to NBC News, “You know why I do it in the subway? Because it sounds so great.”

One Twitter user wrote, “I’ve seen her for years on the Metro. I heard her once singing ‘Ave Maria’ and thought it was a radio at first. Everyone has a story…this woman does too. I don’t know why she’s been homeless all these years, but she’s a human being…that’s all that matters.”

In the wake of her social media stardom, a GoFundMe page has been launched to help Zamourka.

“I will be so grateful to anyone who is trying to help me to get off the streets, and to have my own place, to have my instrument,” she said.

All Donations will go to Emily so that she can buy a violin to replace the one she had stolen as well as a back up violin so that she can begin making a living again and get herself off the streets. And provide her a safe place she can call home and start living a normal life again.

Emily is homeless she sleeps on a sheet of cardboard in a parking lot with towel for a pillow and plastic for a blanket not to mention she is a woman alone on the streets, winter is coming, the sooner we get the funds to her the better.

Emily could be anyone of us she didn’t become homeless because of her vises, she has none, she was the victim of a crime and an assault that stole her livelihood but not her heart and mind. I want to help Emily because unlike so many people out there she doesn’t need a hand out she needs a hand up. She is a brilliant talent that needs to be heard and enjoyed once again in Los Angeles, I for one look forward to that day.

I want to say a special thank you to each and everyone of you that donate, it is such a blessing to have so many wonderful people willing to help. God bless you all