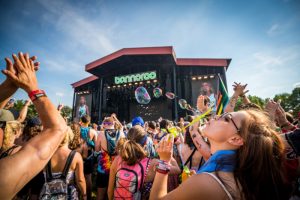 By Tatiana Cirisano | When the first Bonnaroo Music & Arts Festival came together in 2002, its founders — college friends Ashley Capps, Richard Goodstone, Rick Farman, Jonathan Mayers and Kerry Black — didn’t want to just organize a music event. For four days a year in Manchester, Tenn., they wanted to create a community. “That original fan base, they were looking to be represented, to camp, to see a good live show,” says Jeff Cuellar, vp strategic partnerships at festival promoter AC Entertainment. Before long, that vision grew: “We wanted to provide a positive impact that extends from our Bonnaroovian community to the state of Tennessee and beyond.”

That meant ensuring the festival had a charitable component. Since 2002, organizers have donated over $7 million to a wide range of causes, from Habitat for Humanity to the Country Music Hall of Fame and Museum. In 2009 the festival’s founders launched the Bonnaroo Works Fund, which claims a portion of the proceeds from ticket sales and oversees on-site activities like a silent auction and a 5K run. At the end of each fundraising cycle, the BWF board distributes grants between $1,000 and $10,000 through an online application process to nonprofits with Tennessee-based arts, education and sustainability initiatives.

While festival organizers made a habit of one-off donations from the start, like setting aside $30,000 to help build a skate park in Manchester that opened in 2008, the fund raised a record $250,000 in its 2014-15 cycle, just after its inaugural executive director, Nina Miller, pushed to register it as a 501(c)(3).

Kelsey Dewald, a former executive at London-based Extreme Music, took the reins from Miller in March 2018. “I recognized the power that music has in making an impact,” she says, “and not only conveying significance but generating significant funds.” In Dewald’s first year, the BWF awarded over $236,000 to 40 nonprofits, including HeadCount and Musicians On Call. This year’s total is on track to be similarly impressive. Held June 13-16, Bonnaroo hit capacity with 80,000 tickets sold, and put $2 per ticket toward the fund.

The BWF recently helped cover costs for the Nashville Children’s Theatre to put on shows in lower-income areas of Tennessee, and funded solar panels for the roof of the Manchester Coffee County Conference Center.

The current grant cycle kicked off in June and will run through August. Going forward, “we’re making sure that we’re not [just] giving money once a year,” says Dewald. This year marks the first time the fund has overseen the on-site sustainability center Planet Roo; it also signed a new partnership with Propeller, a web startup where members earn points for completing socially conscious actions like registering to vote, to be exchanged for VIP festival tickets or meet-and-greets.

“People think they’re in another world here,” says Dewald about Bonnaroo. “That kind of experience is incredibly impactful and inspires them to go out and make a change.”

This article originally appeared in the June 29 issue of Billboard.

Previous:
REPORTS: The Lowest-Paying Job in Each U.S. State – Big Surprise in Colorado. NOT.
Next:
BUSINESS NEWS: ‘What’s that?’: Construction Begins on Meow Wolf’s Denver Location