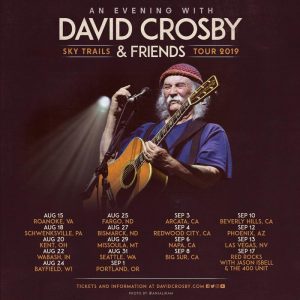 By Lyndsey Parker, Yahoo Entertainment | Early on in the documentary David Crosby: Remember My Name, produced by Cameron Crowe and directed by A.J. Eaton, the famously cantankerous Crosby notes that back in the ‘60s, his soon-to-be-former Byrds bandmates weren’t too thrilled with him spouting his political views onstage or to the press. But a half-century later, Crosby is as unapologetically uncensored as ever — even giving his 2020 election endorsement to Democratic presidential candidate Pete Buttigieg.

“My favorite is Mayor Pete. I love the guy. He’s the smartest man I’ve ever seen in politics ever, of all. He’s smarter than all the rest of them put together,” Crosby says while sitting with Crowe at Yahoo Entertainment. “He’s brilliant, and he’s honest, and he’s dedicated, and he’s brave. Do you know how much guts it takes to go in the military when you’re gay? Volunteer and go because you think you ought to, you don’t want to be a privileged guy and get excused? Do you know what kind of morals it takes to do that? Yeah, I want him to be president. I really want him to be president. … Most politicians will turn around and tell you anything that you want to hear, to get you on their side, and then do completely other stuff when they get in there. Mayor Pete, I think, would not do that.”

As for anyone who might argue that musicians and celebrities should stay out of politics — as he’s been told for the past 50 years — Crosby barks wryly, “I tell them to shut up. I tell them, ‘I got the microphone. You ain’t going to win this one.’ And I also usually ask them, ‘Whose concert do you think you were going to?’ I mean, what the hell? If you’re going to complain about politics, you went to the wrong guy.”

Crosby and Crowe met in 1974, when Crowe, who was only 17 at the time, interviewed the folk-rock supergroup Crosby, Stills, Nash & Young for Crawdaddy magazine. “When he showed up, he was an extremely bright kid, and we all liked him a lot,” Crosby tells Yahoo Entertainment. The two struck up a friendship — ironic, given Crowe’s own warning in 2000’s Almost Famous that music journalists and rock stars should never become friends — despite the fact that Crowe “lovingly” wrote at the time that Crosby was looking “more like Bozo the Clown every day in his purple flares and sneakers.”

That closeness pays off in Remember My Name, which hardly presents what Crosby calls the typical “shine job” of most rock docs. Crowe conducted most of the Crosby interviews for the film and no topic was off-limits, from Crosby’s tempestuous relationship with Joni Mitchell, to the tragic auto-accident death of his girlfriend Christine Hinton, to his acrimonious falling-out with all of his CSNY bandmates. “We didn’t bulls*** you,” Crosby says plainly. Crowe colorfully describes the viewing experience as “boiling in a bathtub of Crosby honesty — and it feels good!”
> > > > > > > > >
Read the whole article at
https://www.yahoo.com/entertainment/david-crosby-talks-survivors-guilt-csn-fallout-and-why-mayor-pete-is-the-smartest-man-in-politics-191304999.html