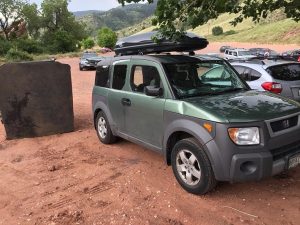 Music fans at Red Rocks can withstand a lot. After all, they’ve been sucker-punched, rocks have fallen on them, they risk dying while hiking after shows, police have tear-gassed the venue (albeit decades ago), and people have been shot.

But few would have imagined that flying porta-potties would be an issue.

Still, at the Widespread Panic concert on June 22, a microburst hit the Upper South Parking Lot outside the amphitheater, sending six portable toilets flying fifty feet across the parking lot, according to Andrew Mowery, a 51-year-old self-proclaimed ambassador between fellow Widespread Panic fans and venue security.

One of the units slammed into his Honda Element, denting it. Human waste spread across the parking lot.

Mowery had been at the venue since around 6 a.m., long before staffers. He was handing out numerically ordered wristbands and helping organize a line of early-arriving fans so they could enter the concert safely. It’s a task he’s taken on at 33 shows in thirteen years after he watched Widespread Panic fans stampede the gates, injuring each other as line-cutters scrambled for prime seats.

After the portable toilets took flight, he and others ran over to check to see whether anyone was still inside them; nobody answered. The group tried to lift the porta-potties, but they proved to be too heavy, so he found people working at Red Rocks and asked for help.

It took staff ninety minutes to show up to the scene, he writes in a complaint he sent to Mayor Michael Hancock, and when they came and heard what happened, “they were rude and abrasive,” he says.

Mowery pleaded with security staffers to help out, but instead of lending a hand, an Argus supervisor told Mowery to contact Liberty Waste Management, the company that provides the toilets, he says.

Hours after the incident, workers finally came to move the portable toilets. Luckily, nobody was inside. The workers proceeded to clean the toilets with a power washer.

According to the complaint, that “exacerbated the biohazard by creating a feces and urine slurry that covered a large area where patrons both waited in line for use of the portable toilets, but also accessed the entire lot.”

Want to know more? Go to the URL to read the whole story!

Andrew adds:
“Why are we waiting until a tragic event to do something about this?” Mowery asks. “[The city is] going through a whole lot of effort to avoid doing the right thing.”

By Kyle Harris
Kyle Harris quit making documentaries and started writing when he realized that he could tell hundreds of stories in the same amount of time it takes to make one movie. Now, hooked on the written word, he’s Westword’s Culture Editor and writes about music and the arts.

Previous:
MUSIC NOTES: How Choir Students Banded Together to Surprise Their Ill Former Teacher
Next:
REPORTS: ‘The Voice’: Outraged Fans Call Out Shortened Performance Montages As ‘a Slap in the Face’