Home ReportsREPORTS: How a Boy Band From South Korea Became the Biggest in the World

REPORTS: How a Boy Band From South Korea Became the Biggest in the World 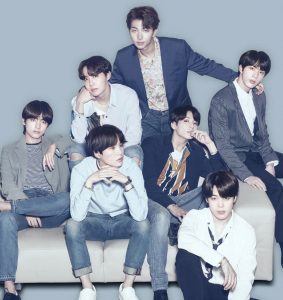 By Julia Hollingsworth, CNN | n February 1964, an English boy band called the Beatles made its US television debut. Beatlemania, the intense fan frenzy directed towards the fab foursome, was gripping America and the group’s performance at the Ed Sullivan Theater was punctuated by fervent screaming from the studio audience. In May 2019, over 55 years later, another band of foreigners played the same theater. The visual similarities were striking — and intentional.

The Korean newcomers sported the same style of slim-fit suits and floppy bowl cuts, emblazoned their name on their drum kit in the same font used by the Liverpudlian hitmakers, and even made their broadcast in black and white.

But this wasn’t the Beatles. It was BTS — a seven-man South Korean mega-group which is quite possibly the biggest boy band in the world right now.

Like the Beatles, BTS had traveled from another continent to perform for their enormous American fan base. But that the South Korean stars had managed to crack the American market was perhaps an even greater achievement. Most of BTS’s songs are in Korean, the group only has one fluent English speaker, and they were selling Americans a distinctly Asian brand of sex appeal.

The K-pop band that could
Six years ago, when BTS released their music video debut “No More Dream” in June 2013, it wasn’t obvious that they would be K-pop’s breakout success story in America.

The group, comprised of Kim Tae-hyung (better known as V), Jung Ho-seok (J-Hope), Kim Nam-joon (RM), Kim Seok-jin (Jin), Park Ji-min, Jeon Jung-kook, and Min Yoon-gi (Suga), presented itself as rebellious “bad boys,” sporting gold chains, bandannas and heavy black eyeliner. The aggressive, rap-heavy track urged young people not to be defined by their parents’ aspirations.
> > > > > >
BTS toured again in the US in 2015, and in 2017 — now sporting their trademark colorful hairstyles — they went back for their biggest year yet stateside, becoming the the first K-pop act to win a Billboard Music Award and make the top 10 of the Billboard 200 charts. In November 2017, they made their US television debut, performing at the American Music Awards.
They weren’t the first K-pop group to try to break the overseas market. YG Entertainment’s Big Bang had gained some overseas success, winning Best Worldwide Act at the 2011 MTV European Music Awards, and in 2012, becoming the first K-pop group to break into the Billboard 200 chart.

But the personal connection with their fan base established through their social media presence gave them a huge advantage, says Cho. The BTS ARMY began to act as a network of unpaid translators, producing English subtitles and texts of their content, connecting BTS with their non-Korean speaking audience.

Most of BTS’s Twitter posts aren’t in English, but today the group has over 20 million followers on the platform, more than Beyonce or UK hit-maker Ed Sheeran. Individual BTS members don’t have social media accounts, meaning the group’s fan following was concentrated on one account per platform.

In 2017, as their fame rose stateside, they landed appearances on “The Ellen Show” and Jimmy Kimmel.

Cho believes it was the group’s large social media following that got the US TV shows interested.

“(BTS) really had to rely on their fans to be their advocates whereas other groups had a bigger machine behind them,” Cho adds. “I think it was … the power of their numbers of Twitter followers … which really brought them a lot of media attention, which helped them become a household name.”

An ecosystem of fans
BTS aren’t just savvy at social media — to their fans, they are trailblazers within the K-pop genre.

While K-pop hits are mostly not written by the band members, many BTS songs have one of the members credited as a writer or producer, particularly J-Hope and former underground rappers Suga and RM. But more importantly, their songwriting — particularly in their earlier works — goes beyond the love-lorn lyrics of some other pop hits.

In 2014’s “Spine Breaker,” BTS hit out at young people who are using their parents’ money to buy expensive things. In 2015’s “Baepsae” they rebuke the older generation for promoting the idea that the younger generation are lazy. In 2018’s “Idol” they discuss the importance of loving yourself, regardless of what others think.

BTS’s works also often reference literature or philosophy. Their latest album, “Map of the Soul: Persona,” is a reference to the work of psychiatrist Carl Jung — and even the album’s party hit “Dionysus,” ostensibly an ode to getting drunk, references the Greek god of wine.
> > > > > > > > > >

To read the whole story, which contains pictures and videos, go to:
https://www.cnn.com/2019/06/01/asia/bts-kpop-us-intl/index.html