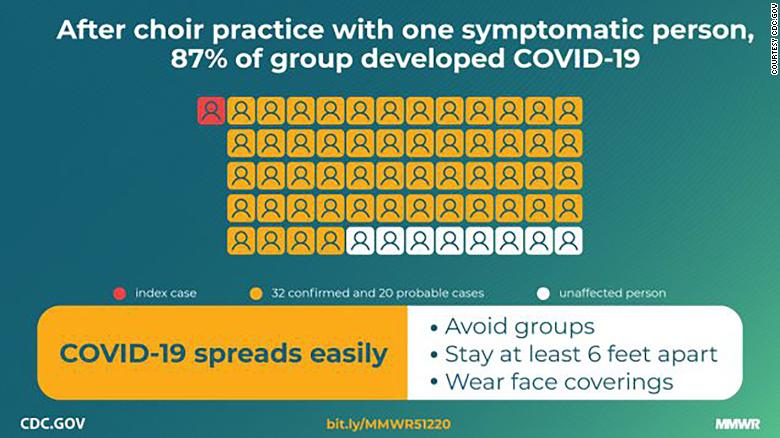 Home ReportsREPORTS: How Coronavirus Spread From One Member to 87% of the Singers at a Washington Choir Practice

REPORTS: How Coronavirus Spread From One Member to 87% of the Singers at a Washington Choir Practice 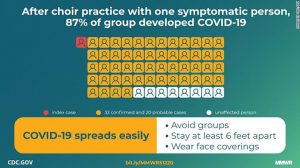 A chart showing how the virus spread to the choir.

By David Williams, CNN | Public health officials studying the Covid-19 outbreak among members of a Washington choir found numerous ways the virus could have spread, according to a report published by the Centers for Disease Control and Prevention.

Authorities interviewed all 122 members of the Skagit Valley Chorale, which met every Tuesday for 2.5 hours before the outbreak. They focused on two rehearsals held March 3 and March 10 in Mount Vernon, Washington.

The report said 53 people were sickened and two died — and all but one attended both rehearsals. The report said Thirty-three cases were confirmed, the report said, and 20 people had probable infections.

There were 61 people at the March 10 rehearsal, including one member who reported having had cold-like symptoms. That person tested positive for Covid-19 and was the first case identified by health authorities, according to the report.

That person attended both practices but didn’t start showing symptoms until March 7.

The CDC says 87 percent of the singers at the March 10 rehearsal developed Covid-19
County officials issued social distancing recommendations on March 10, but most people were probably not yet aware of them, according to a statement from Skagit County Public Health.
No one reported physical contact between the attendees at the practices, but they sat close together. The report said the chairs were 6-10 inches apart, but there were empty seats between some of the members.

The choir broke into two groups for part of the practice. Members moved closer together for that 45-minute session, they said.

“The act of singing, itself, might have contributed to transmission through emission of aerosols, which is affected by loudness of vocalization,” the report said. The report also said that some people, known as superemitters, release more aerosol particles during speech than their peers.
> > > > > > > > >
Read the rest of the article here including how soon attendees developed symptoms:
https://www.cnn.com/2020/05/13/us/coronavirus-washington-choir-outbreak-trnd/index.html

Previous:
REPORTS: Remember Small, Sweaty Music Venues?
Next:
BUSINESS NEWS: Kyle Harris of Westword Reports on The Shaky Future of Denver Arts and Culture Funding | Every June Concert at Red Rocks Has Been Canceled or Postponed