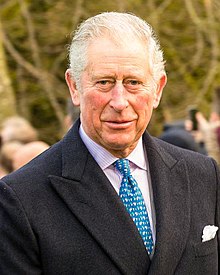 Charles – Prince of Wales. Also a trumpet and cello player AND a conductor!

[WOW! Who knew? The Prince studied music!] Prince Charles reveals how he picked up the baton to conduct a romantic orchestral surprise for wife Camilla’s birthday as he calls for schools to teach more music

Prince Charles said he picked up a baton as a romantic surprise for his wife Camilla on her birthday. The heir to the throne provided the insight during an interview with BBC Radio 3 where he also bemoaned the lack of music education in schools.

Charles, who learnt [sic] the cello and trumpet at boarding school, says the creative arts make an ‘enormous contribution to the whole economy’.

And Britain risks ‘shooting itself in the feet’ by ignoring their importance, he argues.

The prince makes his remarks in a special edition of BBC Radio 3’s Private Passions to mark his 70th birthday and more than 1,000 editions of the program.

He tells host Michael Berkeley about the role music has played in his life, listing favourites ranging from classical composers to 1930s dance bands and singer-songwriter Leonard Cohen.

Charles shows his romantic side in his listening choices. Among them is Wagner’s Siegfried Idyll, which the composer wrote for his second wife and arranged for musicians to wake her up with it on Christmas morning in 1870. Charles admits he organised for the Philharmonia Orchestra to play the piece for Camilla on her 60th birthday. The prince was even persuaded to conduct the music. ‘There is something terribly romantic about it’, he says. Also on his list is a choral work from the Russian Orthodox Liturgy which was performed at his wedding to the Duchess of Cornwall.

The prince says: ‘I am one of those people who believes in the importance of arts and music education in schools. People forget or may not realise what an enormous contribution the creative arts makes to the whole economy. It’s immense. So we certainly shoot ourselves in the feet if we ignore it altogether.’

He agrees with Mr Berkeley that music is essential in a more civilised society as it offers a means to ‘express ourselves in a non-violent way’. Charles says in the show, which is available online from today: ‘Well exactly, I have seen so many examples of this where people have the chance to be introduced to music. In schools which still have it, it is wonderful to see the enthusiasm on the part of the children in the orchestras that they have.’

Recent studies show the number of schools offering music at A-level is in sharp decline and fewer students are taking it at GCSE, prompting fears it could disappear from the curriculum altogether.

The prince tells how he was ‘completely transfixed by the magic’ of music thanks to his grandmother – the Queen Mother – who first took him to the Royal Opera House in Covent Garden aged seven.

He learnt both the cello and trumpet at Gordonstoun and went on to play the cello in the orchestra at Trinity College, Cambridge.

‘For me it is a vital part of surviving the daily round, having music on in the background when I’m working in the evening,’ he says.