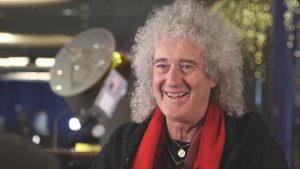 By Mark Strassmann | CBS News | Laurel, Md. — We are getting our first good look at the most distant object ever explored — a piece of rock spinning way out in space. Fittingly, it took a rock star to help find it.

The first clear image of Ultima Thule shows what looks like a celestial snowman, a frozen world 1 billion miles beyond Pluto. It astounded the New Horizons science team, including astrophysicist Brian May.

May, a Sir Isaac Newton look-alike, is also co-founder and lead guitarist of Queen, the iconic British rock band. He’s a rocket scientist by day and rock star by night.

“Different kind of rocks,” he said. “It’s amazing, and the whole trip with New Horizons is such a privilege for me.”

May wrote an anthem for New Horizon’s flyby of Ultima Thule as a tribute to a glimpse beyond our solar system.

“I didn’t imagine that it could happen,” May said.

Now it has, and another one bites the dust.

Original article has videos and a recording of the Ultima Thule theme song:
https://www.cbsnews.com/news/queen-rocker-turned-astrophysicist-brian-may-writes-tribute-to-new-horizons/
Mark Strassmann has been a CBS News correspondent since January 2001 and is based in the Atlanta bureau.