Home ReportsREPORTS: The Lowest-Paying Job in Each U.S. State – Big Surprise in Colorado. NOT.

REPORTS: The Lowest-Paying Job in Each U.S. State – Big Surprise in Colorado. NOT. 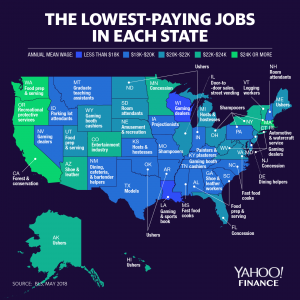 By Aarthi Swaminathan, Yahoo Finance | The U.S. job market is still roaring, but many American workers are stuck in low-paying jobs. According to an analysis by Yahoo Finance — using recently released Occupational Employment Statistics from the Bureau of Labor Statistics (BLS) — the lowest-paying jobs in the U.S. pay an annual mean wage between $18,000 and $26,000 a year.

Those jobs were predominantly in the food industry. Common jobs in the industry include cooking, prepping, and serving food. Here’s a look at each state (with job titles edited for clarity):

“Jobs are low-paying for one of two reasons,” David Neumark, professor of economics at the University of California, Irvine told Yahoo Finance. “There’s a lot of supply and not much demand. And they’re very low-skilled. I mean, how much skill does it take to collect movies at the movie theater, right?”

While workers in the food industry were paid poorly from Alabama to Washington, there were noteworthy differences in wages for the same job across the U.S.

For example, while food preparation and serving earned a worker an annual mean wage of $18,680 in Alabama, the same job in Washington paid $25,550.

Part of the reason is because of the cost of living. According to the Cost of Living Index by the Missouri Department of Economic Development, Alabama was ranked as the 11th cheapest U.S. state to reside. Washington was 38th. In other words, workers in Washington were paid more as it was commensurate with the cost of living.

The lowest-paid job among all the states was in Louisiana, where gaming and sports book writers and runners earned a mere $17,820.

And while there were only around 11,200 people in this profession, they formed a decent proportion of jobs in states like Alaska, Montana, Nevada as of 2017.

Nearly 60% of American workers are paid at hourly rates, according to the BLS. And out of those workers, nearly 1.3 million earned wages below the federal minimum wage.

And with inflation creeping up, many of these workers could see their purchasing power decline as the government has kept the minimum wage at $7.25 for the 12th year in a row.

The industries that often paid workers below minimum wage were the leisure and hospitality industries, followed by education and health services, according to BLS data.

The states that had the biggest proportion of people making less than the minimum were Texas at 12.5%, Florida at 8.1%, and California at 5.5%.

One person who has sympathy for these workers is JP Morgan CEO Jamie Dimon.

“I’m in favor of generally minimum wages going up,” Dimon told Yahoo Finance Editor-in-Chief Andy Serwer a recent interview (video above). “We got to give people more of a living wage. And I think if the federal [minimum wage] maybe raises, then states should do more locally so it doesn’t damage the economy too much.”

Dimon added that he was also in favor of expanding the earned income tax credit.

And with businesses automating rapidly, some of these jobs could no longer exist in the near future.

Generally, “the jobs that can be automated and are getting automated are the ones that are very routine,” Neumark said.

Referring to the example of ticket takers, he said that “you can get anyone to do that job… because it’ll make your business more productive. You’d love to replace those people with a machine if you could, but they haven’t yet for some reason.”

But to those who worry about automation causing millions of job losses, Neumark had a simple response: “We’ve been automating for 200 years. And we’re getting richer, not poorer.”