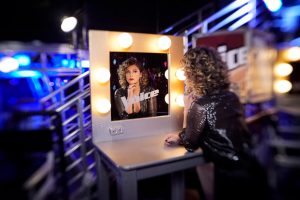 Let the Battles begin! On Monday, October 16th, The Voice Season 13 moved on from the Blind Auditions to the Battle Rounds, with guest advisers Kelly Rowland (for Team J.Hud), Rascal Flatts (Team Blake), Joe Jonas (Team Adam), and good ol’ Billy Ray Cyrus (helping out daughter Miley). The night commenced with a surprising (and surprisingly steal-free) verdict, and concluded with a tasteful tribute of sorts to the late Tom Petty (who, come to think of it, would have made an excellent Voice adviser) and a double-steal.

Let’s recap! [The below is only one of the recaps… because Shilo is from Denver]

Sixteen-year-old baby badass Moriah slayed her Heart song during the Blinds, while all I can remember about Shilo is that her frog-throated Raspy McRasperson audition seemed more like a commercial for Ricola or Sucrets. (A concerned Adam even fetched her a glass of water.) So again, I expected this would be no contest. And again, I was surprised — pleasantly this time — when Shilo cleared her throat and held her own. That glass of water must have done the trick!

Don’t get me wrong: In this showdown between Miley’s two “growlers” on the Guess Who’s “American Woman,” it was not hard to guess who deserved to stay. Not only did the Joan Jett-esque Moriah have the right rawk ‘n’ roll attitude and an electric guitar to boost her coolness quotient (and, probably, give her a bit of an onstage crutch/prop), but she also had the more powerful pipes. However, Shilo was a shocker. She sounded a gazillion times better and showcased a gazillion times more stage presence than before. Paired with a less formidable Battle partner, she might have had a chance.

Adam called Moriah “unbelievably cool and unique and different.” Blake called Moriah a “born rock star.” Miley called her a “rock goddess — but you’re just great as a singer, without attaching your age or your gender or anything to you.” Shilo knew she was a goner, but at least this American woman redeemed herself after a terrible first impression.

In another note, Kristi Hoopes had a 3-chair turn on Tuesday, October 10th – Miley Cyrus couldn’t turn because her team was already full. Kristi chose Blake Shelton as her coach. Kristi has yet to compete in the Battle Rounds but will, more than likely, be on the October 23rd or 24th shows. The Voice is shown here in Denver on NBC’s Channel 9 starting at 7:00 p.m. each night (2 hours on Monday; one hour on Tuesday).