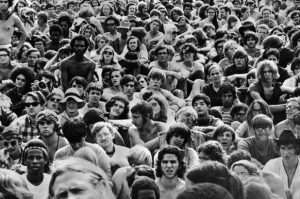 A crowd watches the stage during the Woodstock Festival in 1969. (AP)

By Togna, 9 News – AP | It looks like this summer’s Woodstock 50 festival may not be happening after all. Tickets for Woodstock 50 were supposed to go on sale last week, but the festival delayed sales to refine ‘logistical plans.’

The festival’s financial partner, Dentsu Aegis, released a statement Monday to Billboard explaining that it has decided to cancel the event because they don’t believe the production “can be executed as an event worthy of the Woodstock Brand name while also ensuring the health and safety of the artists, partners and attendees.”

However, festival organizers dispute that statement and claim it hasn’t been canceled.

In a statement, Woodstock 50 told the Poughkeepsie Journal that it “vehemently denies the festival’s cancellation and legal remedy will (be) sought.”

The three-day musical festival was promoted as “3 days of Peace, Love & Music,” to celebrate Woodstock’s 50th anniversary, but has been plagued by logistical problems and delays.

Tickets were supposed to go on sale last Monday, but that was put on hold. The festival released a statement last week saying they were refining “logistical plans.”

Jay-Z, Dead & Company and the Killers were announced as headliners of the event. The festival was set to take place in Watkins Glen, New York, about 115 miles northwest of the original site. The event is separate from an anniversary concert planned at the site of the original festival in 1969.

According to Billboard, the festival has been plagued by issues with financing and permits and were growing concerned the site wouldn’t be able to hold the size of crowd they hoped to attract.

The Associated Press contributed to the report.