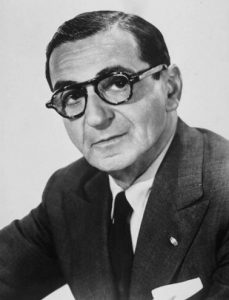 Mo Rocca, CBS Sunday Morning | Nat King Cole lit up the room with him with “Blue Skies”; Judy Garland broke hearts with him with “What’ll I Do”; and Fred Astaire danced to him, as did Gene Wilder and Peter Boyle (sort of), with “Puttin’ On the Ritz.”

As a fellow songwriter once said of the man who wrote all those songs: “Irving Berlin has no place in American music; he is American music.”

Broadway musical director Andy Einhorn, a longtime fan of Berlin’s, said, “I think what’s interesting now is we hear these songs and we define them, the term that people always say is: Why are they timeless? You know, he spoke directly to our heart.”

Berlin wrote more 1,500 songs, for every mood, and every occasion.

He wrote “White Christmas,” which Bing Crosby first performed on his NBC radio show on Christmas Day, 1941. He also wrote the classic “Easter Parade.” Perhaps surprising when you consider that Berlin was a Jewish immigrant.

He was born Israel Baline in Russia in 1888. As a five-year-old, he watched as his family’s house was burned to the ground. Victims of religious persecution, they found refuge in America, settling in New York City’s Lower East Side. When Berlin was 13, his father died. The family needed money.

“One of the things he did was busking, singing on the street. Singing for restaurants. Singing in clubs,” said Josh Perelman, chief curator at the National Museum of American Jewish History in Philadelphia.

Berlin soon started writing his own songs – words and music. He bought his first piano at age 21; he owned it when he composed “Alexander’s Ragtime Band,” his first international hit.

“His process was often to imagine the music in his head, and then use what skills he had as a pianist to find the melody,” Perelman said.

Berlin was not a great pianist. He could only play in one key, F-sharp (the black keys). So, he bought a special piano. By pulling a knob, the whole keyboard moved, changing keys.
> > > > > > > > > >
She showed Rocca Berlin’s 1942 Academy Award for “White Christmas,” a song with an origin story that wasn’t exactly merry and bright.

“It has a melancholy underpinning, the song,” said Swett. “My grandparents had a baby boy, Irving Berlin, Jr., and he died on Christmas Eve, when he was just four weeks old – Christmas Eve, 1928.”

“Were you aware growing up that privately they were grieving on that day?” asked Rocca.

“It’s not something we could talk about. No, they were very private about it.”