SONGWRITERS’ CORNER: The War and Treaty: Songs of Healing 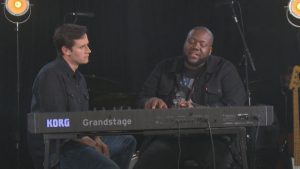 On stage, Army veteran Michael Trotter Jr. is fearless. Together, he and his wife Tanya perform as the duo The War and Treaty. But 15 years ago, when Trotter deployed to the war in Iraq, he was understandably terrified.

“I was afraid, I wanted everybody to know I was afraid,” he said. “Because I hoped that that fear would say, ‘All right, let’s send him back home,'” he laughed. “The Army’s like, ‘You signed up, you’re here. Let’s fight.'”

Trotter dropped out of high school at 16. At 19, he became a father. He enlisted in the Army as a way to support his baby daughter. “I thought, like, wow, I have really made the mother of all mistakes. But then you meet the boys and the gals, and if you’re lucky you meet your missing family members. And you connect.”

One of Trotter’s commanding officers, Captain Robert Sheetz Jr., could tell that he was struggling. He’d heard Trotter liked music, so he suggested he learn to play a piano that had been discovered in the palace where their unit was based.

“He’s, like, ‘Whenever you’re here, on your free time, come here and find home,'” Trotter said.

He practiced regularly, his thoughts never far from the piano’s former owner: “It had been owned by Saddam Hussein. I found it very interesting that I was learning on an instrument owned and touched by such tyrannical hands, and it’s now serving me for peaceful, healing means.”

Trotter wrote a song for Scheetz’s memorial service. When his commanding officers saw how his performance inspired others, they saw an opportunity: “The powers-that-be decided that that is what I would do; I would literally write songs about the fallen for memorials.”

After almost two years in Iraq, and far too many memorials, Trotter returned home. He continued to write and perform, which is how he met Tanya Blount at a music festival. Blount had had an early brush with fame, performing with Lauryn Hill in “Sister Act 2: Back in the Habit.”

“I kind of just lost the zest for it,” Tanya said. “I wanted to be able to give the audience that fire, and I just didn’t have it anymore.”

But when she met Michael and heard him perform, sparks flew.

Correspondent Conor Knighton asked, “What was it about those songs that spoke to you?”

“They were honest,” Tanya replied. “That’s the thing that I love about Michael, is that he’s honest, and that’s not something you can make up onstage.”

The two started working on songs together, got married, and had a child. But Michael was having trouble adjusting to civilian life.

Tanya recalled: “One Fourth of July he was just up under the bed, hearing the fireworks. And I was like, ‘What’s wrong?’ And he didn’t tell me that time, but then it happened again, and I sat him down and I said, ‘Whatever’s going on, I really want to know what it is.'”

Tanya insisted that Michael go to a veterans hospital. “They told him that he had PTSD,” Tanya said. “And we went home and I said, ‘You are a wounded warrior.’ He was like, ‘Well, I’m not wounded. I’m not shot up, I didn’t lose a limb.’ And I said, ‘But that doesn’t mean you’re not psychologically wounded.'”

Tanya encouraged Michael to play her some of the songs he had written while he was in Iraq. “That was the entry point to Michael allowing me to know what was going on, through the songwriting. So, I started to hear the songs and listen to the lyrics, and it was letting me in without him sitting me down and saying, ‘This is what happened.'”

In August, the War and Treaty released their debut album, “Healing Tide.”

What if I told you how to take the bad and make something good?
What if I gave you my heart from the start of your world?
Would you let me be your boy?
Would you be a part of the healing tide?

To watch the music video of The War and Treaty’s “Healing Tide” click on the video player in the original article.

Greg Kusel traveled to Nashville to hear his old Army buddy perform. The last time these two men saw each other, they were bunkmates in Ramadi, Iraq.

Kusel said, “I just have such a positive impression of Michael. I just remember his singing and thinking, ‘Wow, I really hope that he continues on with that.'”

Most of The War and Treaty’s songs aren’t memorials. Although, in a way, you could argue they all are.

Every night when Michael Trotter takes the stage, he’s reminded of all those he served with who can’t be in attendance. “On my back sits the spirits of those fallen boys and girls, and they’re cheering, ‘Go Trotter! Go! Go!'” he said. “I feel it.”