Home Talent NeededTALENT NEEDED: Where Are All The Female Musicians?

TALENT NEEDED: Where Are All The Female Musicians?

What happens to all the female musicians you see in marching bands, orchestras, and the millions taking lessons when growing up? Why do so few of them go on to play professionally, or even part time? We all know gigging times are tough, but for years females have actually had a better chance than males to capture many jobs being offered.

I know a lot of band leaders who would prefer hiring females over males if they have the chance.  Why? I suppose the main reason is that having a female player is still thought of as “different” or “unique” and will help set the band apart from the competition. This applies to original as well as cover groups, and this situation has been going on for years.

I have to admit an embarrassing prediction I made. Back around 1975, just as “woman’s lib” was gaining steam, I predicted to my co-workers that by the year 2000 there would be just as many females as males in bands, and there would be just as many all female bands as all male bands.  Wrong! To this day I am still dumbfounded as to why this never happened. Got any ideas? Write me with your thoughts.

Need a band member?  Hit http://MusiciansContact.com/groupform_free.cfm  to enter a free ad, view profiles of available players, and contact them directly. 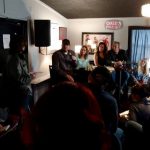 Previous:
KUDOS TO: Speakers and Helpers at COMBO’s House Concerts Program
Next:
NEWS: ASCAP Settles With U.S. Over Music Licensing