Home Thoughts and PrayersTHOUGHTS and PRAYERS: 1.15 Million Americans Have Been Killed by Guns Since John Lennon’s Death

THOUGHTS and PRAYERS: 1.15 Million Americans Have Been Killed by Guns Since John Lennon’s Death 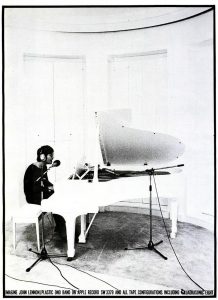 By Tessa Stuart, Rolling Stone | It was shortly before 11 p.m. on December 8th, 1980, when 25-year-old Mark David Chapman fired five shots from a .38 caliber revolver into John Lennon’s back. Police officers rushed Lennon to Manhattan’s Roosevelt Hospital, 12 blocks away, in the back of a police cruiser. Hundreds of mourners gathered in the courtyard at West 59th Street and Ninth Avenue, holding vigil as they waited for a doctor to deliver news of his condition.

The scene that unfolded that night has repeated itself — with minor variations for time, location and number of victims — over and over again in the 35 years since, most recently outside a pair of hospitals in San Bernardino, California.

Some 1.15 million people have been killed by firearms in the United States since Lennon was gunned down, according to data from the Centers for Disease Control and Prevention, confirmed by New Yorkers Against Gun Violence. (The figure includes estimates for the two most recent years.)

Since 1968 — the year the Beatles released the White Album — more Americans have been killed by gun violence than in all U.S. wars throughout history, combined.

Hillary Clinton was in Florida last week, giving a speech citing the staggering statistics about American gun violence, as the San Bernardino shooting was taking place.

“Ninety Americans a day die from gun violence, homicide, suicides, tragic avoidable accidents — 33,000 Americans a year die,” Clinton told the crowd. “It is time for us to say we are going to have comprehensive background checks, we are gonna close the gun show loopholes.”

In an address delivered from the Oval Office Sunday evening, President Obama urged Congress to consider a proposal to ban gun sales to individuals on the government’s no-fly list, and called for limits on assault weapons. Both proposals are supported by all three Democratic presidential candidates, and opposed by the majority of the Republican field.

Republican candidates Marco Rubio, Rand Paul, Lindsey Graham and Ted Cruz voted against measures that would expand background checks and prevent terror suspects on the no-fly list from acquiring guns the day after the San Bernardino shootings; those candidates have received thousands of dollars from gun rights groups this election cycle.

Jeb Bush and Marco Rubio spoke out against the measures, citing the unreliability of the no-fly list. Ohio Gov. John Kasich was the lone Republican candidate to express support for the proposed rule. “Of course, it makes common sense to say that, if you’re on a terrorist watch list, you shouldn’t be able to go out and get a gun,” Kasich said.

Earlier this year, Obama gave one of his strongest speeches yet on the broader issue of gun violence in America, in the wake of the mass shooting at Umpqua Community College in Oregon. Gun violence is “a political choice we make,” the president said, noting that “we, collectively, are answerable to those families who lose their loved ones because of our inaction.”

Lennon’s widow, Yoko Ono, took to Twitter Tuesday to call for an end to gun violence.
Over 1,100,000 people killed by guns in the USA since @JohnLennon was shot and killed on Dec 8 1980#StopGunViolence