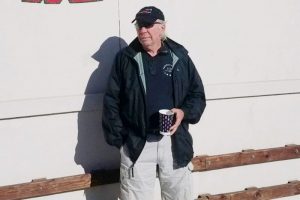 David Turner (from a GoFundMe page set up to help)

By Robyn Merritt, People | Josh Turner is asking his fans to “keep praying” after a tour bus carrying his road crew crashed earlier this month, leaving seven of the passengers injured and one dead.

The country star, 41, broke his silence on Tuesday about the fatal incident, writing on Facebook, “As I try to write this I don’t know what to say. It’s a struggle to put into words the devastation and grief that our road family is trying to process.”

“We lost a beloved member of our team, David Turner,” Turner continued. “He was like a brother to so many in this industry and a devoted husband, father and grandfather. Please continue to keep David’s family in your prayers.”

“All of our crew suffered significant injuries and many have long roads to recovery. I would ask that you give them privacy during this time.”

Turner went on to share that a GoFundMe page [see below] has been created in hopes of raising funds to cover the medical costs for the surviving crew and funeral arrangements for David.

“Your prayers have been felt,” Turner continued. “Please keep praying.”

According to multiple reports, the bus was leaving the Vina Robles Amphitheater in Paso Robles, California, after wrapping up a concert for the country musician, when it crashed off of Highway 46 near Shandon.

Turner and his band were not on the bus, according to a tweet from the San Luis Obispo County Fire Department.

California Highway Patrol told KSBY News that, for unknown reasons, the driver left the roadway and drove 20 yards before the bus fell from an 80-foot cliff.

Two passengers — one of whom died at the scene — were ejected from the vehicle. Several other passengers suffered significant injuries from the plunge. Authorities say two were airlifted to a hospital with major injuries and the remaining five were taken to the hospital by ambulance.

“Josh Turner and his road family have suffered a devastating loss,” the singer’s rep told PEOPLE in a statement. “Please keep the crew, band and Josh in your thoughts and prayers.”

The Fire Department shared on Twitter that they would “be at [the] scene several hours for investigation and clean up.”

According to KSBY, CHP has ruled out drugs or alcohol as the cause of the crash and will be impounding the bus to see if there were any mechanical issues. They are also looking into whether the driver, who is believed to be in his 50s, suffered any medical issues that could have caused the crash.

The tour bus was headed to Washington State where Turner had his next scheduled performance at the Central Washington State Fair on Friday, Sept. 20. His rep told PEOPLE that all remaining shows in September will be rescheduled for a later date.