Home Thoughts and PrayersTHOUGHTS and PRAYERS: Steve Lawrence Has Been Diagnosed With Alzheimer’s

THOUGHTS and PRAYERS: Steve Lawrence Has Been Diagnosed With Alzheimer’s 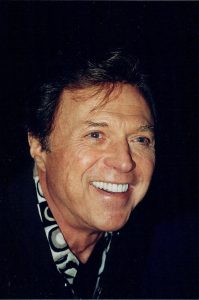 By Christina Dugan, MSN | In a letter released by his spokesman Howard Bragman on Tuesday, the 83-year-old singer, best known as a member of the musical duo “Steve and Eydie” with his late wife Eydie Gormé, opened up about his recent diagnosis and how he’s coping with the news.

“Dear Friends, There have been a number of rumors and some press reaching out to me and I feel it’s important that I tell my own truth,” he wrote in the letter obtained by PEOPLE. “I have been diagnosed with Alzheimer’s disease, and it’s in the early stages. I am being treated with medications under the supervision of some of the finest doctors in the field. Fortunately, they have managed to slow down this horrific process. I’m living my life, going out in public and trying to spend as much time as possible with my family and friends while I am still able to engage and enjoy.”

He continued: “I want my beloved fans to know that in spite of this bittersweet moment, what I don’t want is pity or sympathy – I have lived and am living a wonderful, joyous life filled with love, support, and amazing moments. With my beloved Eydie, I had one of the great loves of all time; my career has always been there for me as a source of joy and fulfillment; and you, my fans, have shown immeasurable love and support in ways I only could have imagined.”

“As I continue this journey, I ask for your prayers, your good wishes and implore you to find the joy every day, because what I feel is gratitude, love and hope — nothing more and nothing less, and I hope you can find the same,” he concluded. “With love, Steve Lawrence.”

Throughout the years, he starred in a number of TV shows and films including The Judy Garland Show, Gilmore Girls, The Blues Brothers, The Yards, and more, often being praised by famous stars such as Frank Sinatra.

But his biggest success? His marriage to Gormé.

The couple, who wed in 1957, shared their love for music together with their duo “Steve and Eydie.”

“Eydie has been my partner on stage and in life for more than 55 years,” Lawrence wrote of his wife, who died in. 2013, on his website. “I fell in love with her the moment I saw her and even more the first time I heard her sing. “While my personal loss is unimaginable, the world has lost one of the greatest pop vocalists of all time.”

Steve Lawrence (born Sidney Liebowitz; July 8, 1935) is an American singer and actor, best known as a member of a duo with his late wife Eydie Gormé, billed as “Steve and Eydie”. The two appeared together since appearing regularly on Tonight Starring Steve Allen in the mid-1950s until Gormé’s retirement in 2009 (Gormé subsequently died August 10, 2013).

Previous:
IN MEMORIAM: Dr. John Passes // Other Notable Musicians’ Deaths
Next:
INTERESTING BITS: Want to Know the Top Song in Any Particular Year – Like When You Were Born?