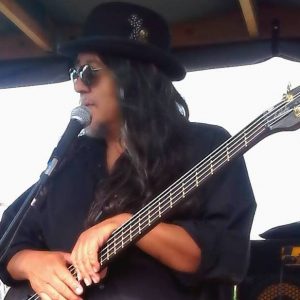 From Local Musician Jerry Roys on Fb, 10/14/17: One of America’s biggest opioid drug dealers is big pharma, and the middle men are those who lobby for them and the Congress members they payoff.

My step-children (I don’t like that word, nothing step about them) – anyway, their mother became hooked on opioids after taking them for pain management, a large number of oxycodone a month, morphine patches, Xanax, and some on top of other medications she was taking made her not the person I had married. It’s insane, and in the beginning I really thought, well the doctor is prescribing it, so it must be OK, and the person being prescribed the medication also believes this and it becomes a strong argument to continue on with the addiction.

It began to affect her quality of life and the quality of life for those who loved her. One thing that would happen is – while she was high on the medication – she wouldn’t feel any pain, so she would do physical work that was hurting her, so when the pain meds wore off she would take more to deal with the pain. This eventually led to a severe addiction, and a personality change.

When she would wean herself off them she would be more upbeat, she laughed – I can hear her laugh now. However, she still had to deal with the pain, so the cycle would continue. There were times I had to take her to the hospital because she would OD. She never meant to harm anyone, not herself, when she was herself she was a loving, caring person, the person I married. The drugs finally did take her, a lot of heartbreak for those who loved her.

The drugs may have subsided the pain but the amount that was prescribed also caused a lot of her pain. Something needs to be done, when elected officials are being “bought” to pass laws that harm society, those responsible need to be held accountable. We are talking corruption in its lowest form, corruption that kills individuals. I’m just tired of the bullshit, tired of elected officials taking money to pass laws that harm us, or those we love. Time for a real change. This was hard to write. I’m done. Peace, be kind and love someone.

CBS ran just such a story on 60 Minutes on Sunday, October 15th:
https://www.cbsnews.com/news/ex-dea-agent-opioid-crisis-fueled-by-drug-industry-and-congress/

From Caesar Ruiz on Fb: My close friend’s (a Las Vegas drummer) daughter was killed in the Harvest Festival shooting. Please send prayers for him and his family. He wishes to remain anonymous but it grieving sorely.